It was a warm and breezy morning in South Florida. My girlfriend and I had packed up our car with snacks and toll money, hopped on the Florida Turnpike, and bustled down south to the Wynwood Convention Center for Life in Color. Located in the heart of Miami’s art and club district, a more perfect place for Miami’s biggest paint party could not have been picked. Splashy murals and bustling street markets painted every street surrounding the festival, offering plenty of pre-festival activities for early birds such as ourselves. The air was ripe with the smell of street peanuts, the sounds of Cuban music, and all around ravers began swarming by the hundreds to get in line. I sipped on a cool glass of lemonade while a plane dragging an ULTRA 2018 banner soared above.

“a more perfect place for Miami’s biggest paint party could not have been picked.”

The first thing I noticed while waiting in line for the festival was the tremendous amount of local police and emergency services stationed outside the festival boundaries. Nothing makes me feel better before going into a festival than knowing that the proper public support systems ensuring physical and medical safety are in place. I started chatting with a group of young men in line and we started swapping stories about some of the local EDM clubs and venues in Miami. The line began to move and the festival was officially open. We got through security expeditiously and without complaint, with multiple lines moving, separated by boys and girls. One of the young men we had met had forgotten his ID and was denied entrance. Life in Color is a 16+ event but regardless of the low age restrictions, he was not allowed in. Always remember to carry your ID when going to festivals folks! It doesn’t matter how old you may look, no ID = no entrance. 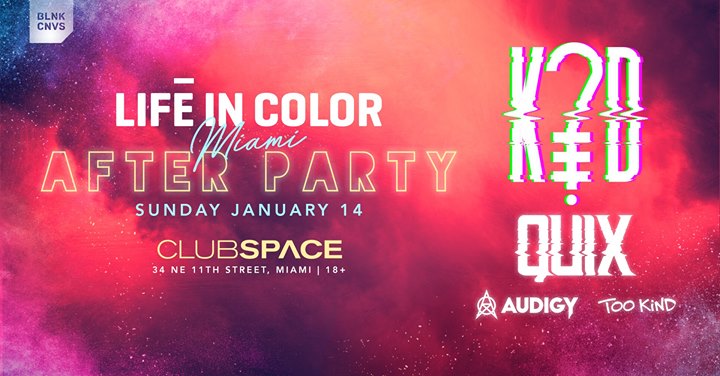 The Wynwood parking lot was a cozy and appropriate space for the venue. Opposite of the entrance was the stage; a classic LED screen arrangement framed between towers of lights, lasers, and subs. To the right side of the venue were water booths, merchandise, and photo ops. At the merchandise booth, you could purchase your typical festival flair and bottles of non-toxic paint- this was a paint rave after all! I particularly enjoyed the photo booth area which had three large letters “LIC” adorned in classic Hollywood bulbs. To the left side of the venue were bathrooms and food trucks. I LOVED the food they had available at this festival. It was a bit on the pricey side (it is Miami after all) but it was definitely worth the cost. Heaping plates of Cuban sandwiches, tacos, rice, meat skewers, burgers, fries, and funnel cakes, ensured that all ravers could get their fill and then some. The areas of the venue were close enough in proximity that one could clearly see where to find everything they might need. I imagine it would have been difficult for even the largest of groups to get lost or separated. Even though the venue was small, It was never too crowded, and the intimacy of the whole experience made the ensuing rager all the more fun!

“the intimacy of the whole experience made the ensuing rager all the more fun!” 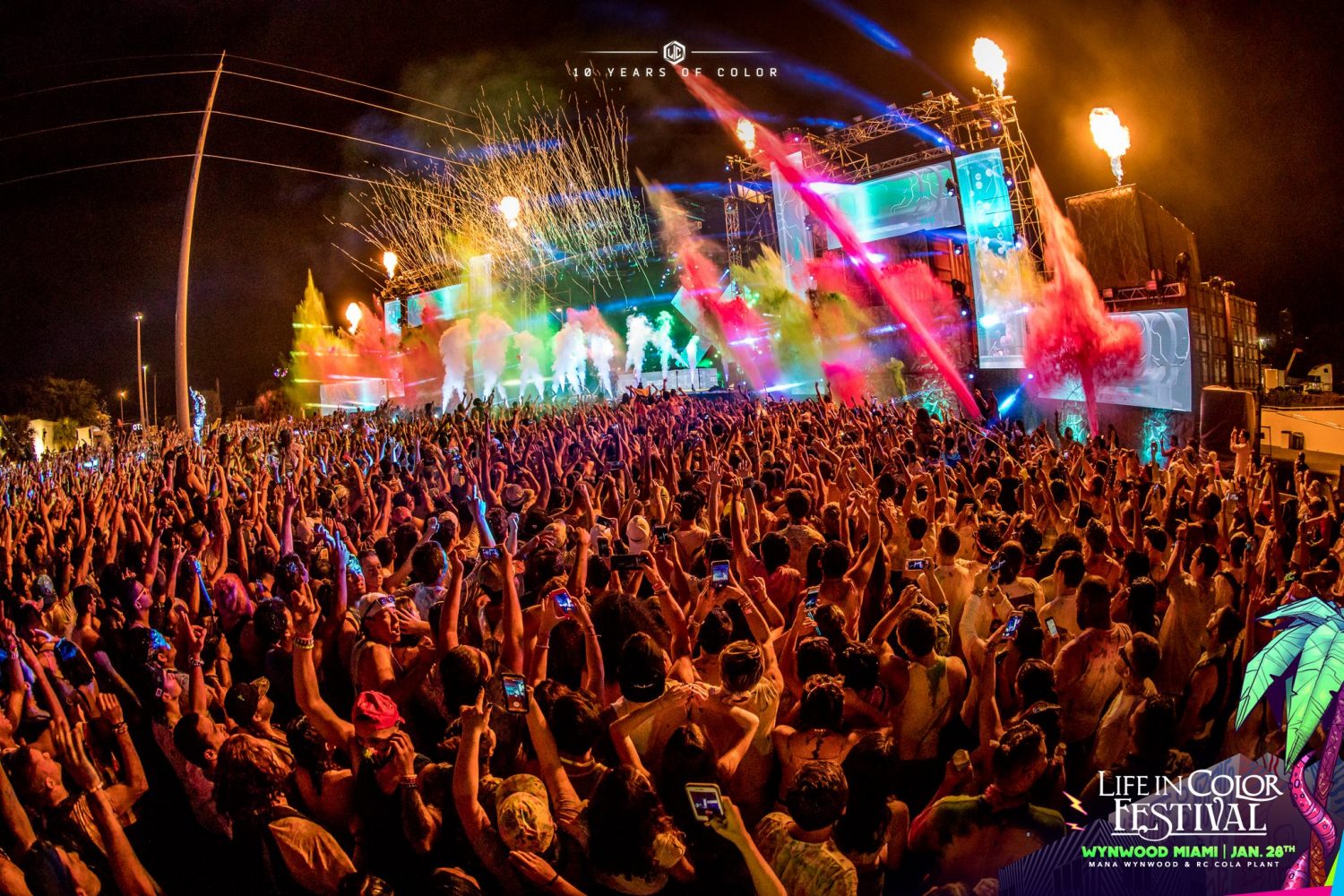 Life In Color had a lineup consisting of alternating rap/trap and EDM acts. Although rap is not my forte, it was still nice to listen to the performers while taking a break from going hard during the electronic oriented acts. Blackbear killed it with a live instrumental performance and Jaden Smith showed up as unannounced surprise act. Lil Pump pumped up the crowd big time. Unfortunately, 21 Savage – the only rapper I was familiar with – had canceled. But the festival goers loved the rappers all the same!At this point in my experience, I began to notice something: my girlfriend and I were some of the oldest people present. Being at a 16+ event there were obviously lots of kids who were clearly still in high school or just starting college. This wasn’t a bad thing! In fact, it brought lots of personal joy to see all these young ravers get excited about the music and culture of the festival experience. Plus they had LOTS of energy. Even EDC Orlando didn’t have anything on these kids. They may have been turning up for the rappers, but the EDM acts unleashed a whole other monster. It seemed to me that Life in Color provided the perfect environment to introduce younger audiences to EDM.

“Life in Color provided the perfect environment to introduce younger audiences to EDM.” 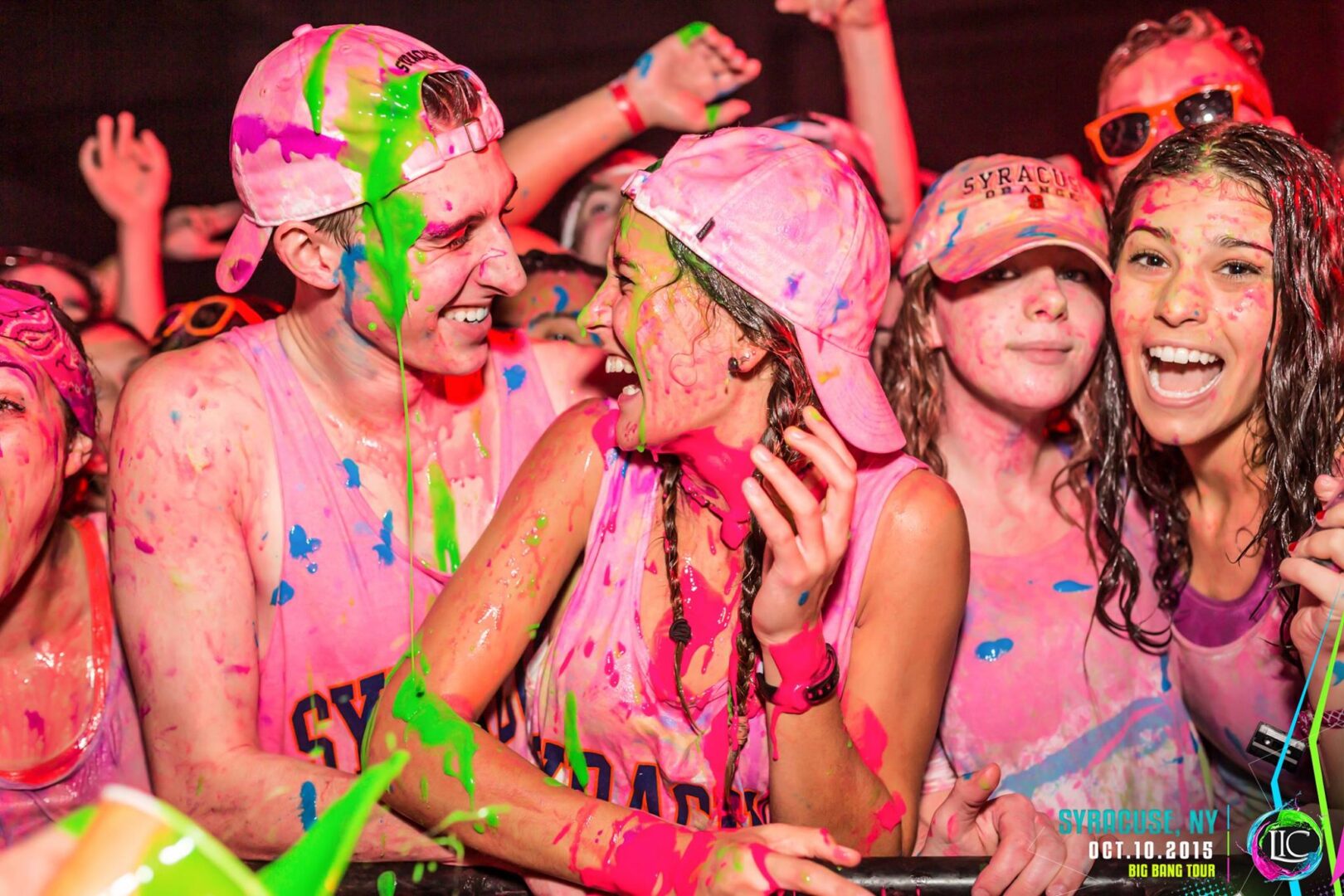 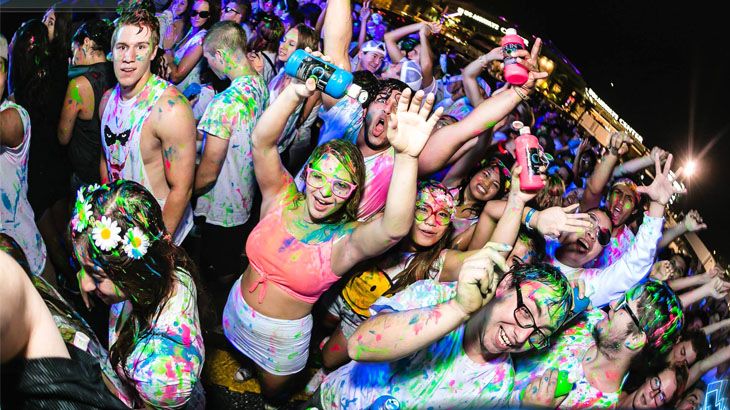 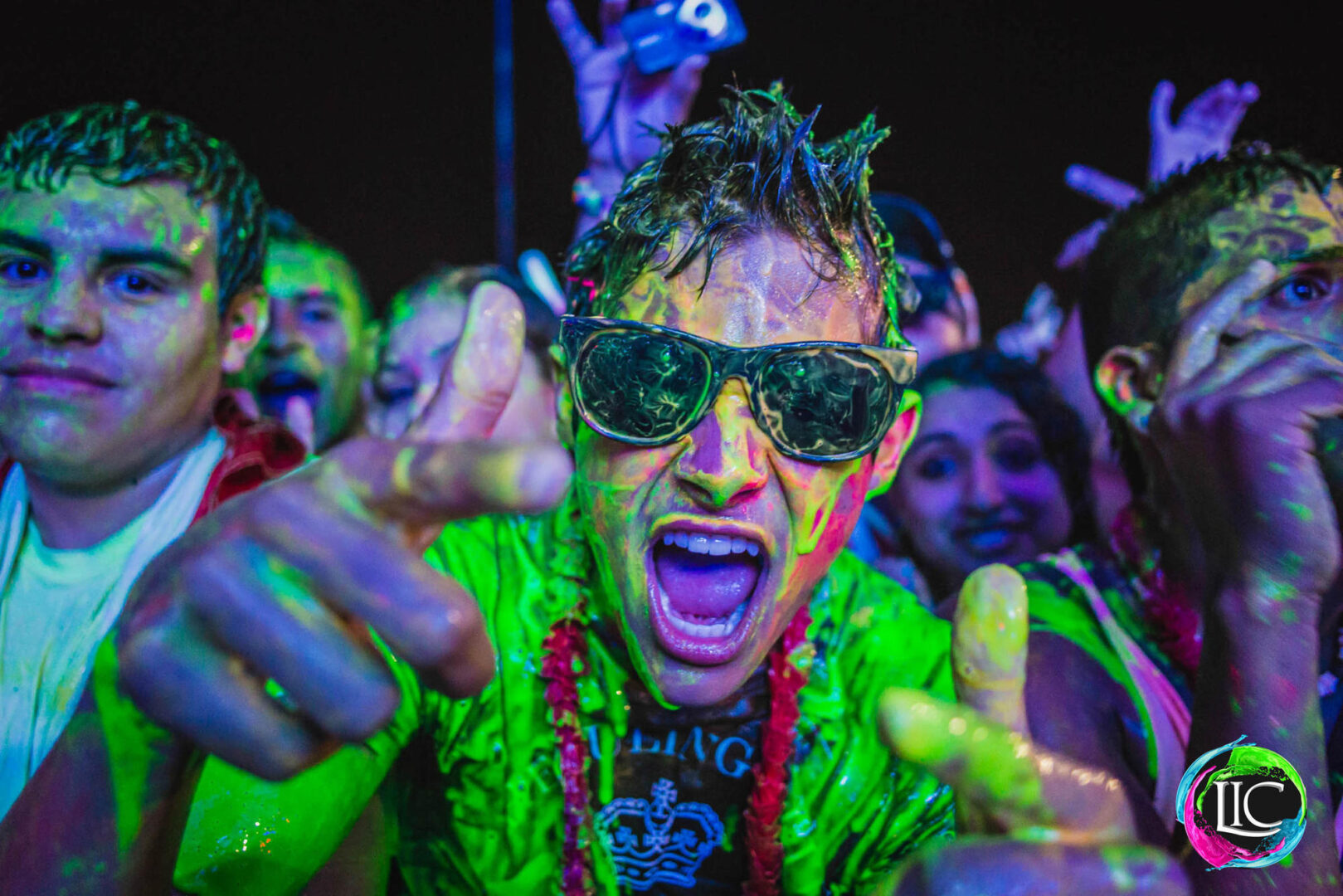 The EDM lineup for the day was Anthony Pisano, Quix, Parker, K?D, Snails, and Zedd. I can certifiably say that every act pushed the party harder. We could mosh for a little bit in the earlier parts of the day but soon we were crammed tight, shoulder to shoulder. Whenever the crowd was feeling a sick drop, ravers would throw and splash their paint EVERYWHERE. It felt wonderful, in the heat of the crowd, to be splashed with cool paint raining from all around. Preceding Snails was LIC’s signature ‘paint set’ in which huge hoses were pulled onto the stage and the crowd was doused head to toe in paint. I was especially excited for Snails as I missed him at EDC Orlando. My girlfriend was excited to see Zedd. Both acts literally rocked the crowd! The crowd would sway back and forth, everyone bumping into each other and exerting the energy back in the direction it came from like a great wave. At one point a plastic trash can could be seen surfing the crowd. I would normally cite this as a safety concern but at this point, things were so crowded and wild there was nothing staff could do to retrieve the trash can. Sail on, Trash Can, sail on. Zedd closed the night off with his amazingly seamless transitions from pop classics to his own originals to his dirty drops and remixes. 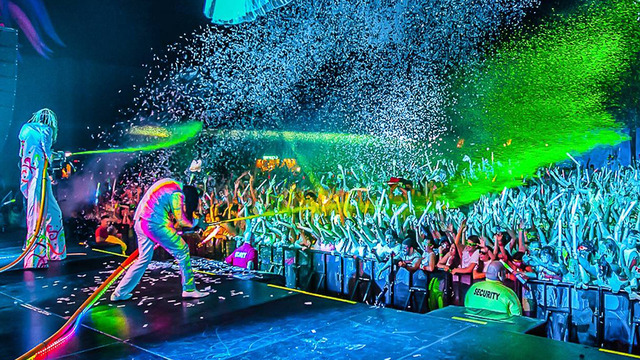 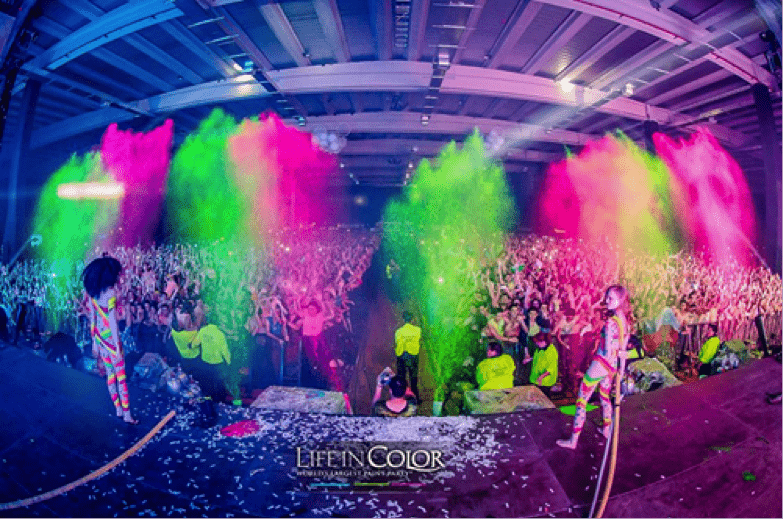 Life in Color: Miami 2018 delivered on its promise as Miami’s hottest paint party. Its youthful audience, delicious food, flying paint, and sick musical acts has certainly established it as a staple festival event for South Florida. If you can’t make it to Miami, they have events ongoing all over the world across each continent! I would highly recommend this event for ravers old and new and I will absolutely be returning to LIC Miami AND trying out the Orlando event as well!