I’m so excited to announce, that after 3 years Detroit’s largest techno festival is back and better than ever! Can’t wait to see you there!

What: Movement in Detroit, Michigan

The History of Techno

I’m going to take you back to when Techno first began. Back in the 1980s, a few Detroit natives decided to fuse house, electric, and funk. Thus creating – techno. After this, techno spread to the UK and Germany. After this, in 2001, Ford Motor Company decided to sponsor a festival to celebrate the birthplace of techno. Originally coined as ‘Detroit electronic music festival’ and later renamed to Movement – which is now Detroit’s largest Techno Festival. Check out our own deep dive into techno here! 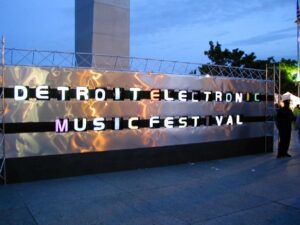 What to expect at Movement

Lot’s and lot’s of techno!

Well first and foremost, a lot of techno. Detroit’s techno festival, Movement has been canceled since 2019 so it’s going to be coming back bigger and better than ever. In the heart of Downtown Detroit right by the water, there will be 6 stages with over 110 artists over the 3 days. Artists from Claude VonStroke to 2 Chains, you will get a mix of everything Detroit has to offer. So, get ready to be absolutely submerged in techno, trance, and house for Memorial weekend! Check out the full lineup here. 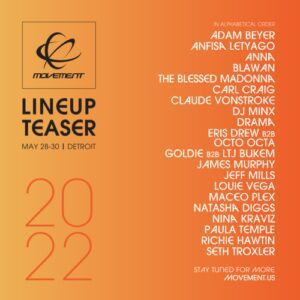 How to get tickets?

Tickets are on sale for Detroit’s techno festival, now! Tickets are selling by tiers, for GA click here. GA starts at about $270 for the weekend, or day passes are $170. For VIP – which has private bathrooms, discounted food/drinks, and quick access to the festival, click here. If 3 days of techno still isn’t enough for you, Movement offers preparties and afterparties. These are called ‘micro-movements’ and happen all over the city before/after the festival itself, closes. You can check out the full lineup of preparties here and the afterparties here.

Let’s get weird at Movement, excited to see you there!