The History of EDM Part 2: The Techno Revolution

This article is part of a series that I began a few weeks ago. It is to be continued as we delve more into the history of EDM. The last article focused on the 70s and 80s, which looked into disco and rising technology. To recap: disco was actually banned by the Nazis and evolved throughout the 70s to become what we know it as today. Check out that article HERE.

The Techno Revolution of the 90s

Before doing my research, I thought that EDM began in warehouses and typically was techno music. This was just what I have heard throughout time. However, throughout the 90s, other genres were growing in popularity as well. For example, this included trance, dubstep, drum and bass, trance, and house music. Crazy how it was more than just techno, huh? These genres really helped EDM to grow and become more mainstream throughout this time. Keep in mind, in the 90s, most of the DJing was done using vinyl turntables rather than what you may see today, which are synthetic turntables. You’ll learn more about that in the NEXT edition of this series.

Detroit was hugely influential in the rise of EDM because of the rise of techno music. This was a staple in the Detroit music scene. According to the LA Film School, the Belleville Three was a big part of the overall success of the techno scene. This included three guys, Juan Atkins, Derrick May, and Kevin Saunderson. The trio began a club in Detroit called The Music Institute. They played their new techno beats and more and more DJs began to catch on. It was the beginning of a revolution.

Check out this playlist of Detroit techno, chosen by Kevin Saunderson! You may have to view the video in Youtube itself to view the whole playlist.

The Legality of Raves

Oh, and did I mention most of these raves were illegal? I mean, they were held in abandoned warehouses and the fine was hefty if you got caught as one of the organizers. And the more people talked about them? The more likely the rave was to be busted. How did you find out about these raves? Well, word of mouth, of course. Generally, you’d get this flyer if you were trusted. If that happened, you’d call the number and sometimes were able to get in. Sometimes, handwritten directions were even given to people trying to enter through multiple checkpoints. Finally, you’d hear the pulsating music! 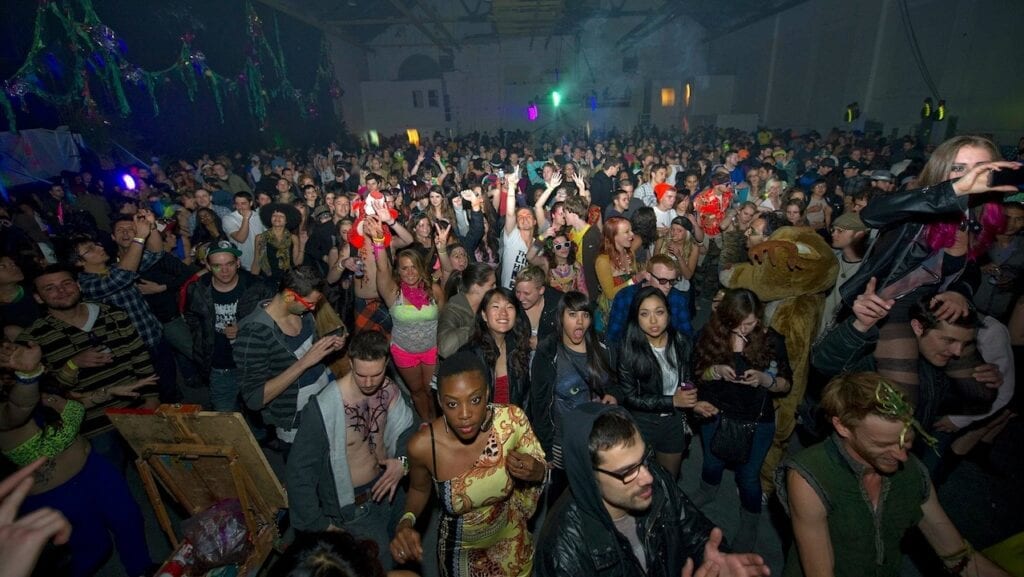 Ever seen the movie Go? While it is a fictional rave, it was meant to be modeled after how raves happened in the 90s.

Due to the overwhelming lack of support from law enforcement, of course, the scene crashed from time to time. Sometimes, the raves were shut down before they even began. Keep in mind, this is the history of the USA, not necessarily Europe. In Europe, the parties were booming constantly.

I think about Pasquale Rotella’s take on EDM. The first EDC happened after Insomianc was founded in 1993. That’s the year I was born, so that is pretty crazy for me to think about! Pasquale began attending these underground raves held in abandoned warehouses and fell in love with the grimy techno that was being presented. He just had to have a part in it. Pasquale’s original events held about 300 people at a time and the first one was Halloween themed. Crazy how things have changed, huh?

Don’t forget to check out all of the other articles in this series. A new post should be coming SOON!
Part 1: The 70s and 80s

Note: As a quick disclaimer, I’m going to cite the sources I used throughout this piece to share that my knowledge came from multiple sources, which I then combined into these posts. There are more sources that will be included at a later time.