Held on the same festival grounds as Wakarusa, Mulberry Mountain in Arkansas, Interstellar Meltdown has put out its official lineup for the first-year premiere edition. Bass music fans will be stoked to see who is performing on the weekend of October 1-3, 2021. Located in Ozark, Arkansas, Interstellar Meltdown is organized by Wakkaan, the beloved bass music label, along with the people behind Wakarusa, and Disco Donnie. 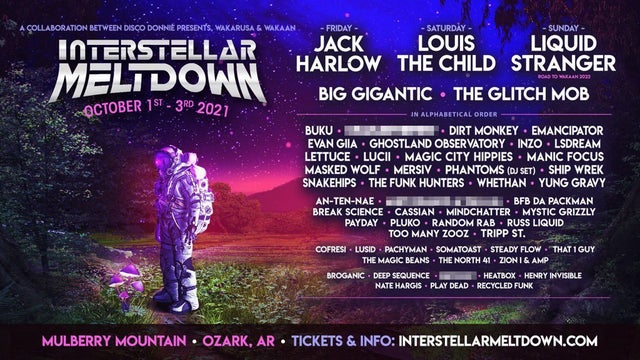 Headliners include Jack Harlow, Louis the Child, and Liquid Stranger on Friday, Saturday, and Sunday respectively. Other highlights on the bill include Big Gigantic, Emancipator, The Glitch Mob, Ghostland Observatory, Break Science, Manic Focus, Buku, and Dirt Monkey. DJs, producers, and livetronica bands make up the majority of the lineup for the camping festival. If you’ve ever been to Wakarusa, then you know how beautiful the mountain setting is, and if you have never been, this is your chance to see Mulberry Mountain in full swing! Dancing the night away and staying up for the sunrise sets makes camping in the mountains worth making the trip. Holding the festival in October means it won’t be sweltering hot, so check out the inaugural year of this bass music heavy festival. There are still a few spots that haven’t been revealed on the lineup, so stay tuned for news about Interstellar Meltdown.