2020 marks the tenth year of collaboration for Red Axes, the Tel Aviv-based duo of Dori Sadovnik and Niv Arzi best described as “punk-electronica”. With their background in rock music and passion for contemporary club sounds, they’re one of the underground’s most fascinating yet multiskilled acts of the century. The channel post-punk, 90’s club culture and new wave that’s, (being a 90’s baby,) is right up my alley. Announcing today their imminent eponymous album via Dark Entries Records, to be released May 8th as the video for new single ‘Sticks & Stones’ ft. Adi Bronicki is out now though. 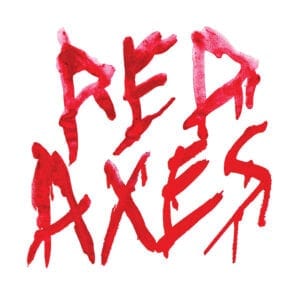 Production support for Red Axes continues to prosper with extensive tours and headlining slots at major festivals. They’ve graced the stage at Sónar Festival with a live performance and mesmerized the Ibizan crowd at the iconic DC-10. As hungry pathfinders, they are never short of creative outlets; from releasing records tuned for deep house-hungry dancefloors on labels such as Crosstown Rebels and Permanent Vacation, to setting up a 12-piece live band to explore their passion for new wave. The deliverance pair has left an admirable discography to date, bringing two LP’s and over two dozen 12”s to their credit. It doesn’t stop there either, to celebrate their anniversary, they reunite with Dark Entries for an eponymic 11-track LP overflowing with jagged guitars, space division, and hypnotic vocals.

Although Sadovnik and Arzi have previously released LP’s on I’m A Cliche and their own Garzen Records, the self-titled Red Axes is their first body of work written and conceived specifically as an album-length listening experience. True art at its finest if you ask me! This type of workflows through a variety of stylistic detours, highlighting your ears as both keen listeners and skilled DJs.

I have taken some time and listened to this track and other live sets on YouTube and all I can really say is I have such high hopes for them, the music itself hits you on a different and deep level. When it hits it’s unlike anything else I’ve heard in a long time. The deep and underground sound makes you feel as if all of your favorite old school raves are right before your eyes and ears. I’m beyond down for this track and overall compilation of great music.

Opener ‘They Game’ is a blithesome production that unifies the psychedelia of cosmic disco with an early 90’s retro sound (which is so important.) While the energy mounts further with ‘Shelera’, the guitar-driven acidulant contribution, and ‘Sticks & Stones’, a guaranteed club hit that’s fueled by vocals courtesy of Adi Bronicki who absolutely kills it.

Launching Side B is ‘Break the Limit’, an Electronic Body Music-laced number that would shy less of a sound out of place on a Razormaid compilation. The following tracks wax moodier, with ‘Brotherhood (Of the Misunderstanding)’ touching on darkwave territory. ‘Udibaby’ and ‘Arpman’ close out the album with their respectively dense and sparse takes on Kosmische Lysergia.

Posted in Festivals and tagged Break The Limit, Dark Entries Records, Duo, Hold, Opener, Red Axes, Shelera, Side B, Sticks And Stones, They Game, Zeze
← SKALPEL RELEASES FINAL SINGLE, BLOWR3HAB and GATTÜSO Drop “Creep”  →
Don’t forget to follow The Festival Voice for all of your electronic music and festival news!
Instagram: @TheFestivalVoice
Facebook: @TheFestivalVoice
Twitter: @thefestvoice
Snapchat: @thefestvoice
YouTube: TheFestivalVoice
We use cookies to ensure that we give you the best experience on our website. If you continue to use this site we will assume that you are happy with us eating these cookies.OkLearn more