The largest Hip-Hop festival in the world is making its return to Southern California at the end of the year. Rolling Loud will take place at the famous NOS Events Center in San Bernardino on December 10-12, 2021, and will be expanding from two days to three this year. Kid Cudi, J. Cole, and Future are set to headline the weekend. The lineup is absolutely stacked with other big names like Wiz Khalifa, French Montana, Gucci Mane, Rod Wave, Tyga, Kid Laroi, Gunna, Jack Harlow, Swae Lee, 2 Chainz and so much more. There will also be a special collab performance by Chris Brown and Young Thug. 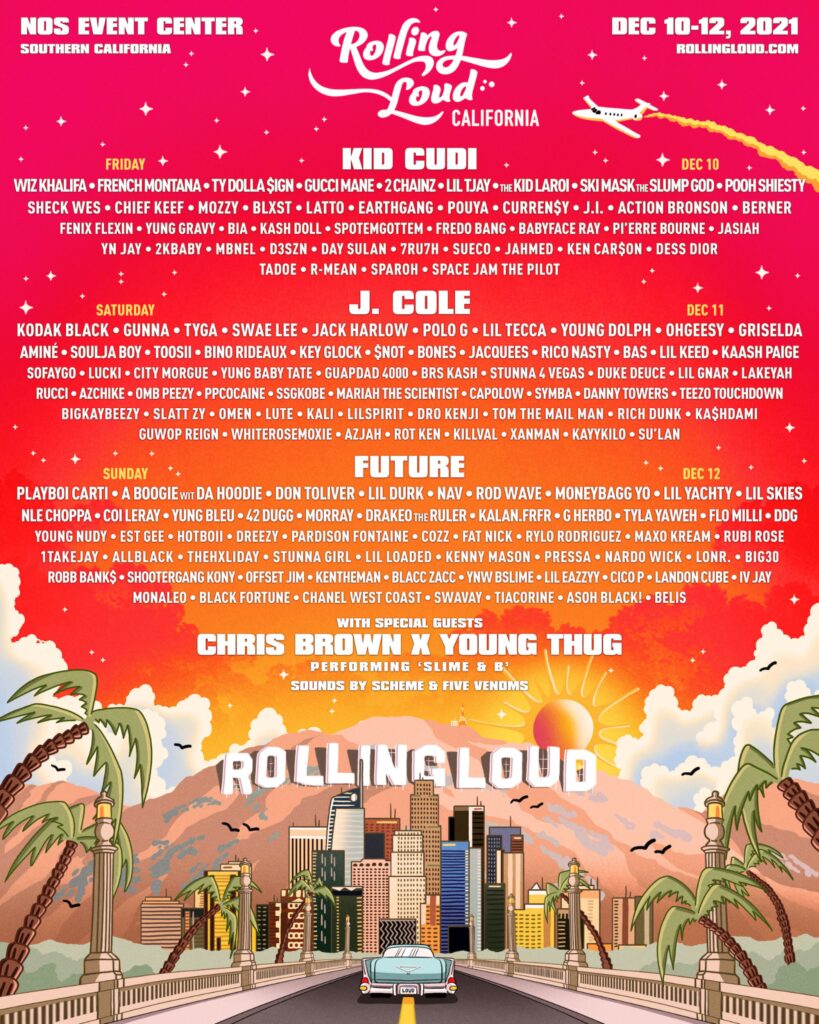 The brand recently had a successful weekend at the end of July in its flagship city of Miami. It was the first major festival to return to the US after 18 months of canceled festivals due to the pandemic. And the festival brought the heat! They introduced the first WWE smackdown at a music festival and upgraded the amenities including a skate park, basketball court, and a bigger main stage. They also partnered with NOBU for exclusive food options and even added a cereal bar for fans to enjoy. Rolling Loud New York is coming up on Halloween weekend and it’s going to be a spooky good time. I can’t wait to see what they have in store for California. West Coast fam, get excited!

With COVID still being a concern for music lovers, Rolling Loud California will require proof of vaccination or a negative test within 72 hours of the event. The festival announced: “The well-being of Rolling Loud attendees, employees, and artists is of the utmost importance. Rolling Loud California 2021 will proceed to the extent permitted by local authorities and will follow all local COVID safety protocols.”

Rolling Loud California is currently sold out, but you can go to their website and join the waitlist for a chance to score some tickets for this epic weekend. Rollingloudla.frontgatetickets.com

Posted in Festivals, Personal and tagged 2 Chainz, Chris Brown, French Montana, Future, Gucci Mane, Gunna, J. Cole, Jack Harlow, Kid Cudi, Kid Laroi, Rod Wave, Rolling Loud, Swae Lee, Tyga, Wiz Khalifa, Young Thug
← Experiencing California Vibrations, the Cali Way.Bring Yourself to NYC’s Nebula →
Don’t forget to follow The Festival Voice for all of your electronic music and festival news!
Instagram: @TheFestivalVoice
Facebook: @TheFestivalVoice
Twitter: @thefestvoice
Snapchat: @thefestvoice
YouTube: TheFestivalVoice
We use cookies to ensure that we give you the best experience on our website. If you continue to use this site we will assume that you are happy with us eating these cookies.OkLearn more