The original lineup was already amazing so these new additions are just icing on top of the cake. They join a bevy of artists from across the genre spectrum, including three nights from alternative rock/indie band Rainbow Kitten Surprise and Dreamville-signee and Atlanta rapper JID for their Hulaween debuts, and festival veterans such as French electronic trailblazer CloZee, Portland’s award-winning Portugal, The Man, fan-favorite psychedelic band STS9, Grammy-nominated producer FISHER, electronic pop duo Sylvan Esso, prestigious jam-band The Disco Biscuits, three nights of festival founders The String Cheese Incident, and more. It sounds amazing! 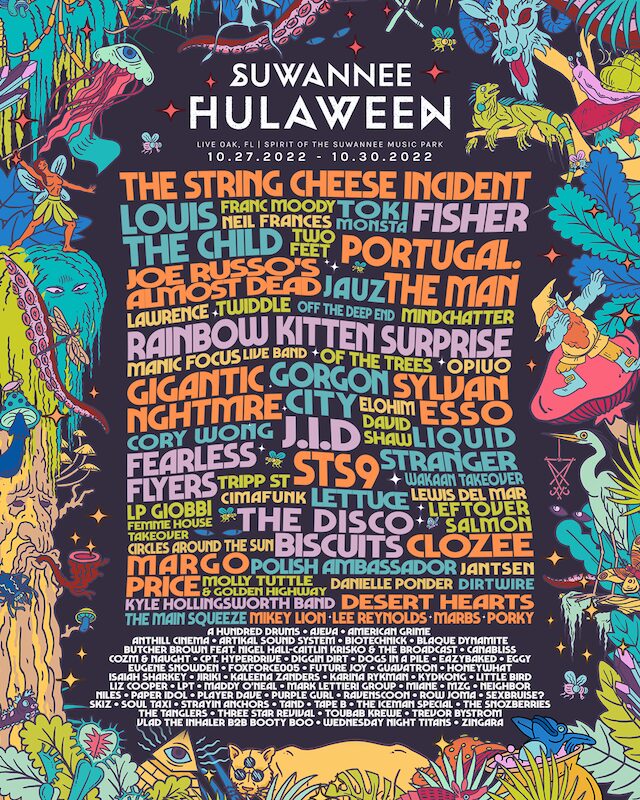 Ready for some takeovers? There are going to be some of the best in the business with bass purveyor Liquid Stranger’s Wakaan, underground party-starters Desert Hearts, and house maestro LP Giobbi’s Femme House.

Hulaween has been bringing us the best of Halloween since 2013 and since then, it has evolved into one of the country’s biggest and best festivals. It makes sure to include some of the best from various genres including electronic, jam, and indie to bluegrass, funk, soul, and hip-hop. Suwannee Hulaween’s ability to abolish genre confines is evident year after year.

Over the course of the past decade, Suwannee Hulaween has hosted artists from all corners of the dance floor at the Spirit of the Suwannee’s idyllic grounds, which serves as perfect setting for attendees to fully immerse themselves in Florida’s lush, enchanting nature.

Hulaween’s Spirit Lake is heralded as one of the leading immersive art experiences across American festivals. There is so much to see and explore as it is brimming with talented sculptors, fire/metal workers, painters, thespians, and lighting designers. Attendees can revel in lakefront projection mapping, hypnotizing light shows, interactive installations, and both visual and performance art, catch performances at Spirit Lake’s two stages, and groove into sunrise at the Silent Disco.