One of the best things about Atlanta is our diverse festival scene. We have ragers for the late-night ravers at Imagine, chill tunes for the indie and alternative folks at Shaky Knees, and bangers for the pop fans at Music Midtown. In addition to all these, we also have groovy jams for those that like to get down at Sweetwater 420 Festival. As the first festival to grace Atlanta in 2022, Sweetwater 420 Festival will help set the vibe for the next festival season and kick off another southern summer. Although this festival falls around the holiday held sacred to tokers around the globe, the actual name comes from the festival’s host, Sweetwater Brewing Company, and their flagship beer. The festival happens the weekend closest to Earth Day every year as the event has become a funding source for non-profits and charities focusing on environmental change. It’s a good time all around as you can support some good causes while getting your party on.

I always love attending this festival because of the mix of talent that gets booked around the in-your-face innuendo within the festival’s name. The 2022 lineup drop has me excited! I was one of the poor souls that had Bonnaroo cancel on them. This lineup has some of the bands I really wanted to see at Bonnaroo including goose, Turkuaz performing Remain In Light, Too Many Zooz, and Big Something. Then you have the stacked headliners with some doing multiple sets. Oysterhead, the Trey Anastasio Band, The String Cheese Incident, Umphrey’s Mcgee, Snoop Dogg, Joe Russo’s Almost Dead, goose, the Dirty Heads, and Snarky Puppy are all on the same bill. I mention goose twice because they are the band you have to see. They are an up-and-coming jam band that never plays a bad show. I have been dying to see them live and am stoke it will be at a music festival. 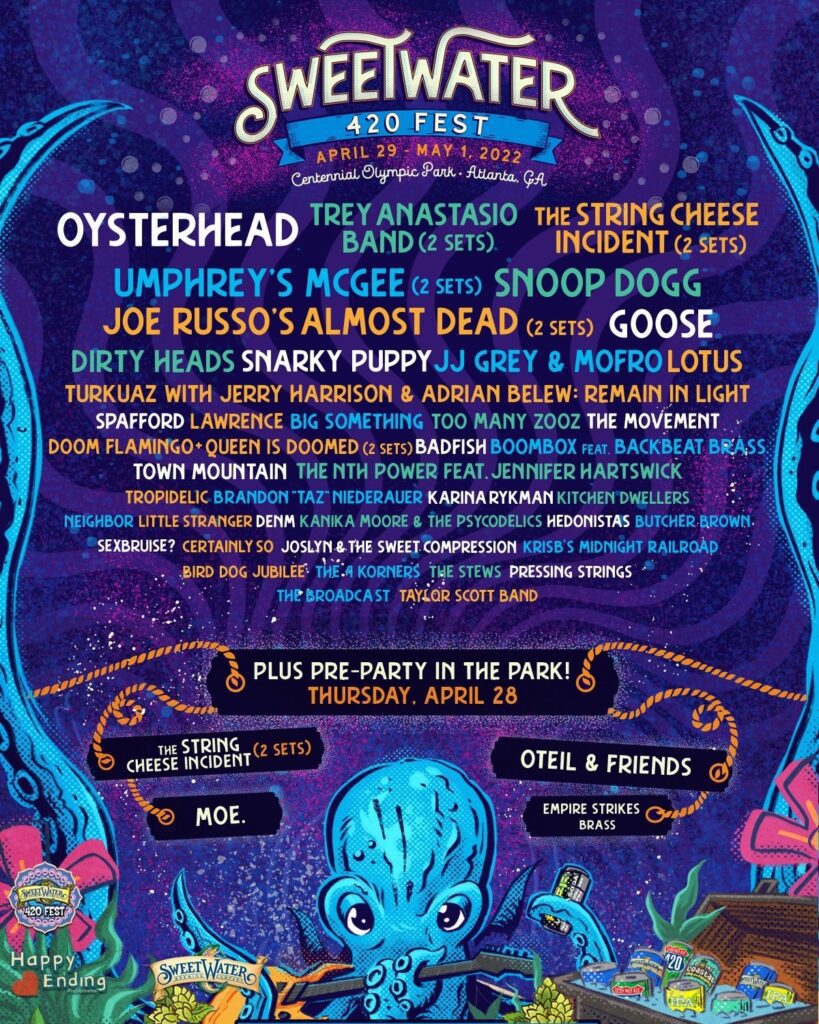 Unlike many other festivals, tickets for Sweetwater 420 Festival run cheap. They start off at $118 for a three-day general admission ticket or $172.50 if you want to include the preparty on Thursday night. Or feel free to treat yourself with Kush or Big Fish VIP upgraded tickets. If you are planning to travel from out of state, you will need to book an Airbnb or hotel. Your best option is to find a place to stay near a MARTA train station and to take the train to Centennial Park. Tickets go on sale Friday 10/8. I hope you can send it with me!