Trigger warning: This thread may include instances where people are treated unjustly with acts of racism, hate crimes, and homophobia. This thread highlights racial relations throughout the rave scene. 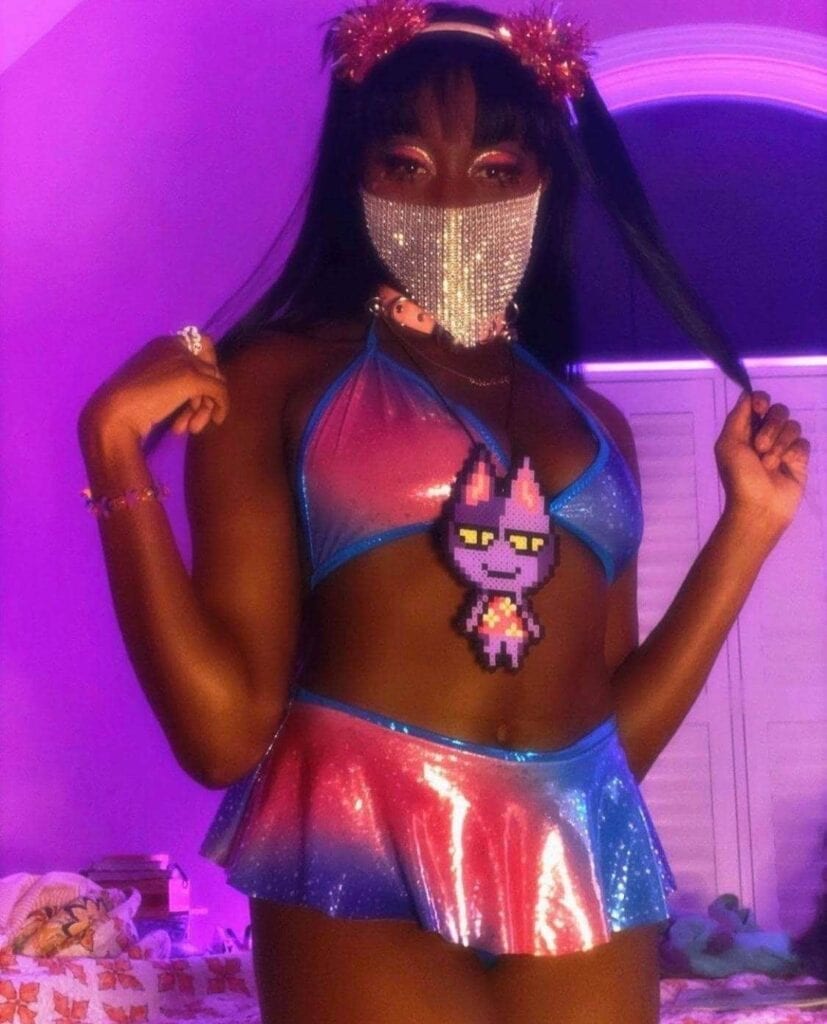 Courtney, a 21-year-old student, was brave enough to tell us about some experiences she has had in the music scene. Trigger warning, as you are about to read her story, it entails situations with sexual harassment.

Tell us a little about yourself. Who are you?

My name is Courtney Walker, and I’m a 21-year-old student from the US. I primarily spend my time on the internet, as I’m a content creator and twitch streamer. I also love raving and got into the rave scene in 2019. I miss going to shows, but I’ve spent time at home listening to music and going to virtual raves to fill time.

Who are some of your favorite artists?

Seven Lions is my absolute favorite, and Porter Robinson is a close second (he was the first DJ I ever listened to). I’m mainly into psytrance and melodic dubstep, so I listen to a lot of that, but I also love techno, and I-o is my favorite techno DJ. I also LOVE Joyryde!

What is your favorite festival/event you’ve ever been to?

The first festival I ever went to was a jam band festival in the middle of the woods, and after that, I got offered a job there to work at Bonnaroo. That was the first time I had ever been, and I’ve been in love with the festival scene ever since.

Do you have any specific instances, either positive or negative, regarding your race/sexual identity in the EDM scene? Share these with us.

Honestly, a lot of the times I’ve ever experienced any racism in the community were online. Any time I’m at shows or festivals, everyone is pretty respectful. I think the only thing that still looms is that a lot of the time, people outside of the rave community see it as a “white” thing to do when black people invented electronic music itself. That doesn’t bother me though, as I love the music and the scene way too much to let something petty like that get in my way.

What do you think about the racial/sexual identity representation in the EDM community?

I always think that it could be better. There are plenty of BIPOC DJs, as well as DJs that are a part of the LGBTQIA+ community, but the majority of the time, the spotlight is mainly on white/female male artists. I hope that we can see more diverse lineups and creators on our TL and at shows/fests in the future.

Are there any DJs or producers you feel you resonate with or represent you well?

Honestly, I wish I could say yes, but I rarely see black female DJs. Ever. It’s pretty sad, honestly. I know they exist because I’ve seen and followed them, but they’re never on lineups or showcased online. I resonate with most of the DJs I listen to in terms of music because I love their sound and their energy, but that’s about it.

Do you generally feel welcomed in the EDM scene?

For the most part, yes! I’ve made tons of friends, and I enjoy going to festivals because I’ll always know at least one person I can hang with. Everyone’s pretty supportive.

Do you feel well represented in the EDM scene?

Bass heads often use the phrase PLUR when talking about the community. Do you think your experiences have represented PLUR?

I feel like PLUR is a band-aid at this point. There’s a time and place for everything, and I feel like it’s overused when people don’t want to face real issues or have real conversations. It’s used as a scapegoat to let people’s negligence or ignorance slide, and that’s not ok, but I feel as though my experiences in real life have exuded the PLUR mindset for the most part. I will say, there is a major issue with sexual assault and harassment in the EDM community that has to be addressed. At my first festival, I ended up going into the fest alone while my friends slept in the tent because we had been working for 8 hours before in the hot sun. I ended up sitting on a table and watching an artist play, and I made friends with a girl who was also alone at the time. While we were talking, two guys about twice our size walked up to us and started talking to us.
We could both tell they were flirting, but it felt harmless, so we didn’t think much of it. By the end of our experience, one of the guys had flashed his dick at us, the other tried to kiss me without consent, and acted confused when I asked him what he was doing. They ended up leaving, but I still think about that experience sometimes and how I look at people differently now at shows. While at the same festival on a different day, I was walking back to find my friends at a different stage, and a group of 5 guys walked around me in a sort of huddle formation. As they walked past me, they started cat-calling me and grabbing my clothes and flow toys to keep me from walking away. Even though I was at such a big festival with tons of people around me, I felt alone and helpless. I was so scared because I couldn’t find my friend and there was no cell service, and I don’t know what would’ve happened if they were more adamant and hadn’t let me go. I hope that in the future, women and other marginalized people can feel safe and comfortable at shows. We shouldn’t have to feel like we’re going to get attacked and harmed at places where we’re supposed to be having fun like everyone else.

Do you see the EDM scene ever becoming more inclusive?

Yes! A bunch of my friends in the community are black and brown, which makes me excited because I’ll be able to see a face that looks like mine at shows and fests. It makes me feel welcomed and accepted in a community that is mostly white.

Do you think the demographics of the EDM scene will ever change?

Yes. We’re watching it change right now, and it’s impressive. I hope it continues to do so.

Is there anything else you would like to tell us?

Continue to advocate for those that need help and make sure to treat everyone with kindness!

Time spent with Courtney, and I could see how loving she wants the world to be and how diverse the community could be. I know that she desperately wants change, and I see how caring she is about our world. I think she’s had a few bumps in the road, and it’s been tough. It’s been a long, hard journey, and Black Lives Matter’s fight is still in effect. I hope everyone remembers that this is a fight that everyone is still fighting. To make our scene, our world and our community a much better place to be in, we must come together now and work to build a better future. Let’s start today.

We want to thank Courtney for her time and her interview. We plan to be posting more information on upcoming threads. If you have a story you would like to share, please reach out to us on social media or email us at Editor@TheFestivalVoice.com.

Check out our previous article on Chris.