Break away from the norm of your day-to-day life with Prime Social Group and Breakaway Festival! This multi-city event just announced their fifth event with Breakaway California. The event is set for Friday, October 14 & Saturday, October 15 at the Oakland Arena Grounds in Oakland, Northern California, the west coast Breakaway will feature live music from Gryffin, Louis The Child, Big Wild, Said The Sky, Tycho, and more. Tickets for the two-day event go on sale Thursday, July 21 at 10 am PST at www.breakawayfestival.com 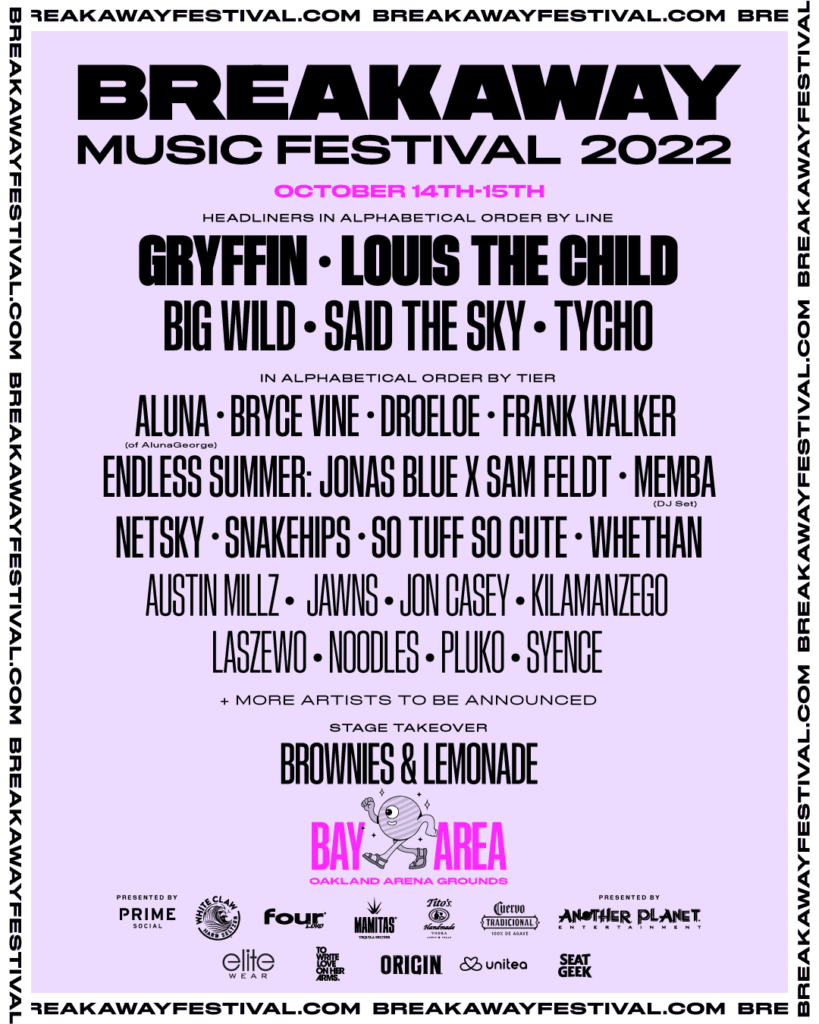 But that isn’t all because there are five different editions, each offering a unique line-up, Breakaway Music Festival will kick off in Kansas City (8/5-8/6) before traveling to Michigan (8/19-8/20), Ohio (8/26-8/28), Carolina (9/30-10/1), and California (10/14-10/15). Breakaway wants you to have the BEST time so they are working closely with partners and local officials in all five markets to ensure the quality festival experiences fans have come to expect, while still keeping up with heightened health and safety protocols. For California, Breakaway is partnering with Another Planet Entertainment, introducing a new festival in the Northern California market.

“We’re thrilled to announce the fifth and final festival for Breakaway in California,” stated Zach Ruben, co-founder of Prime Social Group. “We’re excited to also be introducing a new market into the mix with this amazing weekend lineup of live music.”

“We’re excited to partner with Prime Social Group for the California edition of the Breakaway Festival for something new to our festival portfolio since launching major music events Life is Beautiful in Las Vegas in 2013 and Monterey Pop 50 in 2017,” shares Bryan Duquette, VP of Concerts and Festivals for Another Planet Entertainment.  “What’s most appealing with the Breakaway model is that the pricing is accessible and the diversity of the programming that ranges from electronic to pop.”

In addition to the stellar lineup, Breakaway will have on-site activations at each festival including the   Silent Disco presented by White Claw, a roller rink, rides, local art, and more, taking its unique, all encompassing music experience to a whole new level.

Posted in Festivals and tagged Aluna, AlunaGeorge, Austin Millz, BIg Wild, Breakaway, Bryce Vine, DROELOE, Endless Summer: Jonas Blue x Sam Feldt, Frank Walker, GG Magree, Gryffin, JAWNS, Jon Casey, Kilamanzego, Louis the Child, Łaszewo, MEMBA, Mija, Netsky, Noodles, Pluko, Said the Sky, Snakehips, So Tuff So Cute, Syence, Tycho, Whethan
← We’re Grooving To Groove Cruise CaboSacred Rose Artist of the Week #6: Khruangbin →
Don’t forget to follow The Festival Voice for all of your electronic music and festival news!
Instagram: @TheFestivalVoice
Facebook: @TheFestivalVoice
Twitter: @thefestvoice
Snapchat: @thefestvoice
YouTube: TheFestivalVoice
We use cookies to ensure that we give you the best experience on our website. If you continue to use this site we will assume that you are happy with us eating these cookies.OkLearn more