Ready to win not only tickets, but the entire travel experience to Breakaway? Well, you can do just that with music loyalty platform Unitea! They have has once again partnered with Breakaway as the official app for the festival brand’s five upcoming events taking place across the U.S. this summer and fall. And they want to send you on the ultimate VIP experience! ENTER HERE 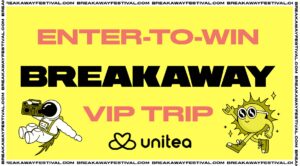 Unitea is a play-to-earn platform incentivizing fan loyalty with exclusive, music-focused rewards and experiences. The data transparency-focused app encourages fans to stream their favorite releases, share music with friends, and create unique content, earning digital tokens that are exchanged into curated prizes. You already listen to music, why not earn from it?

In tandem with the festival, Unitea is hosting a V.I.P. Grand Prize Giveaway! One lucky winner will receive the grand prize of two V.I.P. weekend tickets to the Breakaway Festival of their choice (Kansas City, KA; Grand Rapids, MI; Columbus, OH; Charlotte, NC; California), two shuttle passes to and from the show, one night’s hotel stay for two, a $500 travel stipend, and a Unitea x Breakaway Swag Bag.

There are many ways to enter the contest. First off, download the Unitea app and sync with their Spotify or Apple Music accounts. After that, they begin earning artist-specific Karma tokens when they stream and share music, create content called “Vibes” or interact with other fans. To win the Unitea x Breakaway V.I.P. Grand Prize Giveaway, fans can cash in Karma tokens associated with various Breakaway headliners including Illenium, The Chainsmokers, Tiesto, DJ Snake, and Lane 8. The giveaway will end on Friday, July 8. 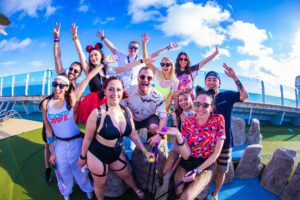 Which Event Will You Choose?

Breakaway is a multi-city festival brand that brings you some of the biggest names in hip hop and electronic music. In the past, we’ve seen some of the best such as Kendrick Lamar, Future, Louis The Child, Illenium, Wiz Khalifa, Travis Scott, Odesza, Zeds Dead, and many more at the festival. 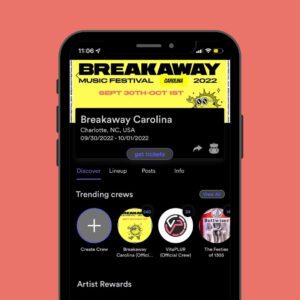 Last time, a beautiful partnership was forged between Unitea and Breakaway. They’ll continue this momentum through 2022. The platform will host all of their apps including ticket information, event information, and their lineup. And the best part is that you can earn rewards just by listening to music! You can join the Crew Chats to connect with other attendees before the event.