It’s been years since I had my first Dreamstate experience, so the anticipation was high. As a lover of trance, Dreamstate SoCal is a mecca of music. Making the trek from Arizona gave me plenty of time to reminisce about my previous Dreamstate experiences. I hoped that it would live up to the memories I had. 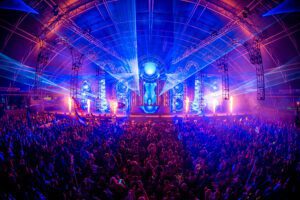 After the several-hour journey and a ton of traffic, I finally made it to the venue. On night one, I made the mistake of parking in the blue lot, which was about a 20min walk from the venue. It wasn’t terribly far, but it is amazing how much a cold wind seemingly lengthened the time it took to get to the gates.

The lines didn’t take too long to get through, although my AZ Mobile ID confused the people checking IDs. It took a few extra minutes for them to let me through. Even with the confusion, the gatekeepers were super friendly.

The festival was just as beautiful as I remembered. Once inside, we were met with very Instagram-worthy portals of light that would lead to The Sequence stage. Beyond the portal, the trees glittered with gold (or orange), blue, and white lights giving that dreamlike atmosphere.

On day one I found myself bouncing between The Dream Stage and The Sequence Stage. The night started with the last half of Captain Hook’s set, followed up with Liquid Soul and Astrix. I couldn’t miss Ferry Corsten or Paul Van Dyk, so I made sure to make some time to see them. 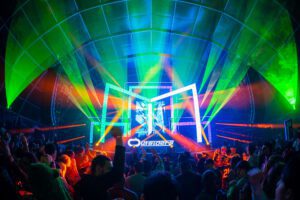 I ended the night with legendary Paul Oakenfold. I was tired and wanted to beat the crowd to exit, but there was no way I was going to miss a second of this set. He ended his set with a remix of Darude’s Sandstorm, a classic, and a great way to close out the night.

Day 2 was one of those “I go to where the music takes me” kind of festival days. The squad and I bounced around for the first couple of hours of the festival. This was the perfect time to take some squad photos at the different installations around the festival. I stuck with them until ATB took the stage at The Dream. Getting to see ATB was a dream. They are one of the artists that I listened to before I ever started raving, so it was a huge nostalgia trip for me. Can you say #blessed?

This Dreamstate was a different experience from my last one. This was mostly because I had a squad to roll with this time. Admittedly, I’ll fly solo or with a friend and end up somewhere near the back of the crowd spinning poi. That can be fun, but it’s nice to be with a group of friends who enjoy the same music as me.

First thing first, the production. Something that I’ve always loved about Insomniac events is the production quality. The Sequence stage was simple, but what really did it for me was the lasers. They did not hold back with the laser beams. I didn’t spend too much time at the Void, but I did get some glimpses of the impressive LED screen setup. The stage that really “wowed” me was the Dream. Walking into the stage area was like walking into an old cathedral rigged with LEDs and lasers. I was lost in the music during Armin Van Buuren’s set until something floating caught my eye. From the arches of the cathedral hung two aerialists dressed in all white.  Like angels descending from the sky, they gracefully spun and danced in the lyras, hanging upside down and reaching out as if to touch the fingertips of the ravers below. I was in awe. As someone who has performed at festivals and different events, this was a first for me. 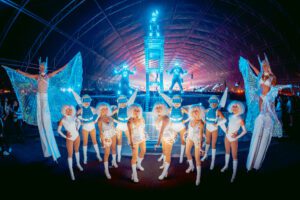 The second highlight would have to be all of the Kigus/onesies. These are nothing new at festivals, especially with the cold weather, but I have never seen so many in one place. With flocks of birds, mobs of meerkats, and parties of pokemon, the rave squads meant business.

#3 Honorable mention would be some of the totems, specifically the animated led screens. I managed to spot 2 at The Dream Stage during Abraxis. 20 points to Gryffindor for creativity and lowkey (non-obstructive) totem.

Last, but not least, the vibes. There’s something to be said about the vibes at genre-specific festivals, especially Dreamstate. The trance fam never disappoints to bring uplifting and “good vibes” to a festival. Easily one of my best festival experiences 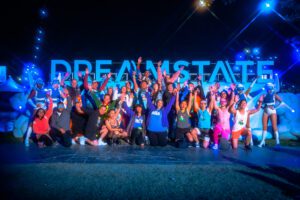 The festival was just as beautiful and dreamy as I remembered. It was a lovely blend of new music, new friends, and nostalgia.