Freakout Records and the legendary Crocodile are bringing the Freakout Weekender back to Seattle! This March, you’re ready for a truly punk rock lineup of acts from all over the world. Some of the currently announced headliners are Swedish rockers Viagra Boys and LA punks FIDLAR. Similar to the previous edition, the single-pass, multi-venue event will be brimming with off-beat charm, unique lightning installations, DJs, and a few surprise guest purveyors of weirdo rock & roll charm. 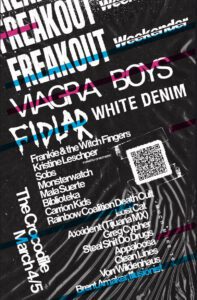 It’s going to be great! This year will have some key differences as this year’s event will lean toward heavier and slightly more experimental artists. Texas psychedelic prog group White Denim will be making their first appearance in Seattle since 2020, and Los Angeles band Frankie & The Witch Fingers will bring a similar dose of manic flavor to the lineup. Mexico City punks Carrion Kids and Seattle/Mexico City supergroup Mala Suerte will both be returning to the Emerald City, along with Kristine Leschper (formerly of the Athens rock group Mothers). There will also be a special appearance from Singapore indie pop stars Sobs. Tijuana fuzz outfit Axxident will make their debut in the PNW, and Los Angeles girl-group Lost Cat will return after a breakout performance at the 2022 Freakout Festival.

Finally, the event will feature a handful of local Freakout alums, including Monsterwatch, Steal Shit Do Drugs, Biblioteka, Appaloosa, and Rainbow Coalition Death Cult, five of the loudest artists currently raising hell in this rainy Pacific Northwest metropolis. Local celebrity cowboy Brent Amaker will also be returning as an MC and illusionist. Tons of great artists on this one!

The Freakout Weekender 2023 will take place at The Crocodile on Saturday, March 4 and Sunday, March 5. Expect further announcements from Freakout soon, including community engagements, lineup additions, special events and more.