All are welcome back.

As I stepped off the shuttle outside the entrance grounds it finally hit me: it had been 18 months since I had last been here. It reminded me of coming back home to my parent’s house after a long study abroad trip. Nearly everything is as you remember it, but you can’t help but notice some of the furniture has been rearranged. With my return to EDC Las Vegas, I was filled with a sense of nostalgia at the familiarity of my surroundings. The lights, the stages, the fireworks, the music, the people. Everything was here, everyone was back. Walking into EDC felt like stepping into a portal to another world. I felt separated from any problems or struggles back home, completely at peace and awe as I took in the spectacle of the electric sky. 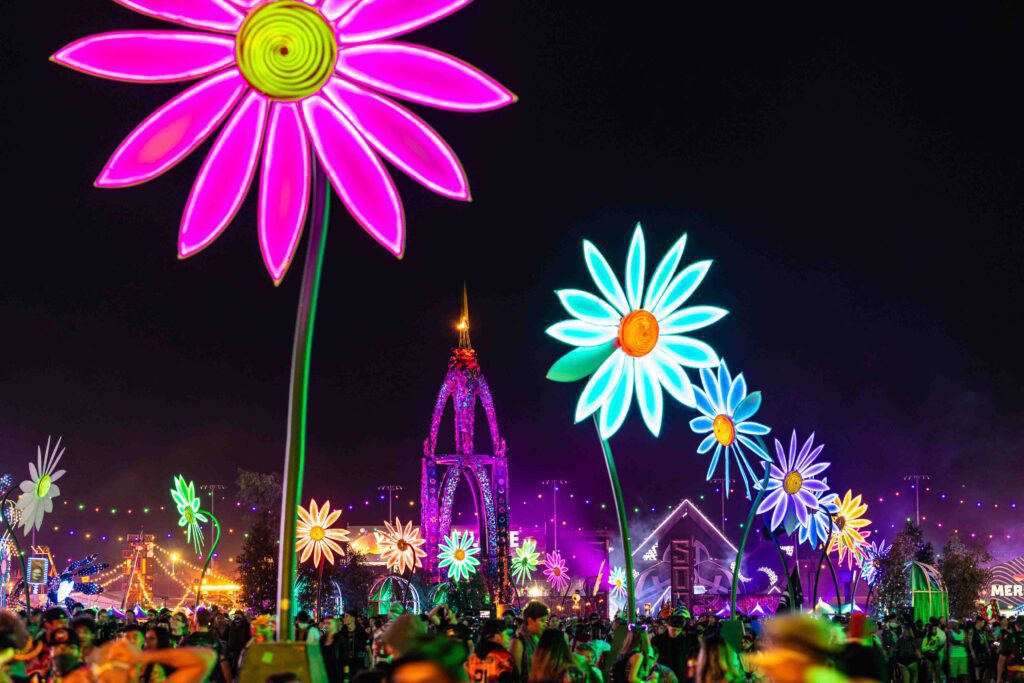 A three-day celebration of lights, art, and music.

The Electric Daisy Carnival (EDC) is an electronic dance music festival held annually at the Las Vegas Motor Speedway. The festival brings over 150,000 people to the grounds each year for a three-day (night) celebration of lights, art, and music. EDC Las Vegas 2021 featured over 300 artists across eight main stages as well as several art cars and sponsored mini stages. EDC also featured several amusement rides, live art performances, parades, and other amenities that take the “carnival” name to heart. The 2021 edition of EDC marks the 25th anniversary of the festival, which was commemorated by a special drone performance and fireworks show each night.

Because of the pandemic, EDC was not held in 2020 and postponed until October 2021. The move to the fall makes this edition of the festival especially unique because it normally takes place in the late spring when it doesn’t get dark until the late evening. This year the sun had completely set before the festival grounds were even open and so festivalgoers got to experience the lights much earlier than usual. Despite the fall weather, the temperature was not that much colder than in May—with it only dipping to the low 60s at its coldest.

EDM consists of hundreds of music genres and Insomniac did an excellent job of making sure attendees could easily find their preferred styles while still offering enough variety to keep things from getting dull. Each of the eight main stages at EDC carried a unique theme and presented a specific set of music genres. At the front entrance, Cosmic Meadow welcomed you as you walked down the bleachers with the latest from the top names in electronic music and hip-hop. Are you a tech-yes enthusiast? Then Neon Garden kept you grooving all night with deep house and techno. Headbangers would inevitably be found at the Basspod stage where dubstep, drum and bass, and trap were blasted out nonstop. (Plus, you might have had a chance to see Shaq AKA DJ Diesel perform!) Personally, I found myself at the Circuit Grounds a lot this year as it hosted some of my favorite artists. The amount of variety EDC offers made it impossible to see everything, but this made everyone’s experience unique, satisfying, and gave you an incentive to try something new each night. 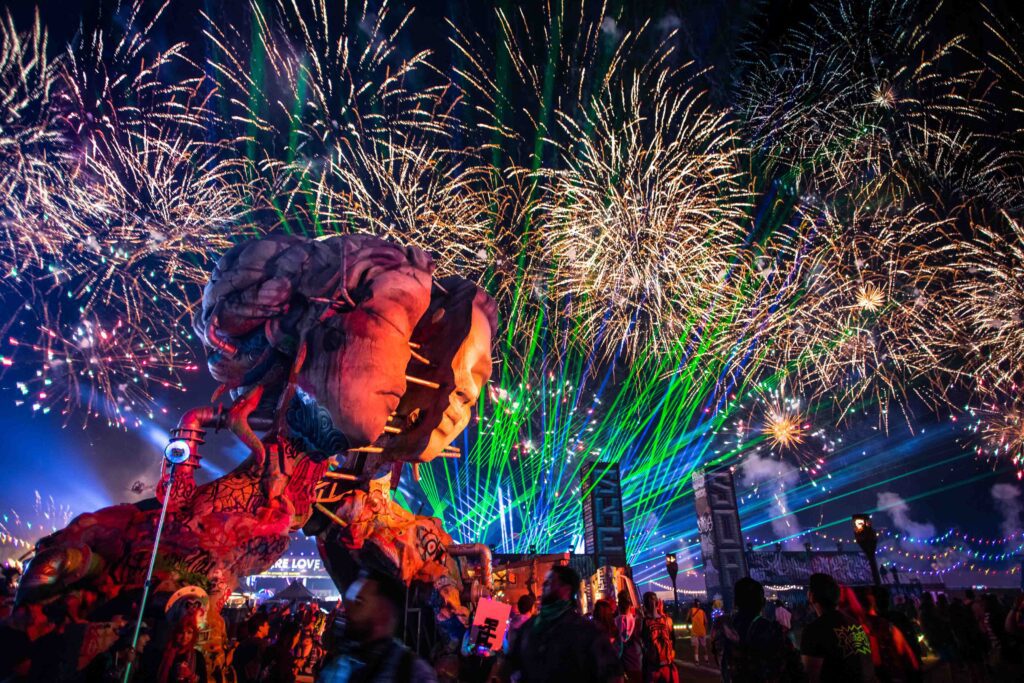 EDC is back along with several quality-of-life improvements.

Those returning from previous EDCs found that everything they loved about the festival remained intact with several quality-of-life improvements scattered throughout. Shuttles entering and exiting the festival were FAST with their lines almost seemingly nonexistent. EDC went cashless this year, so you no longer had to worry about running out of cash to buy merch. The water stations were filtered and used motion detectors to dispense water automatically. For those who purchased VIP passes, EDC offered additional premium amenities such as free charging stations, exclusive vendors, well-lit and flushable toilets (also available to GA+ users), free candy, free kandi, and exclusive views of the stages. There wasn’t anything overtly spectacular about the VIP experience, however, and so even with these additional amenities, it seemed hard to justify the VIP ticket price being over twice the cost of a GA pass. Camping was also available, which offered its own set of activities and amenities. I didn’t do camping this year so I can’t offer my impressions of it, but from what I heard from others at the festival, it was the best way to experience EDC.

When you had time to kill before the next artist you wanted to see, EDC was very enjoyable to just explore and walk around. The Pixel Forest returned from the 2019 edition, where you could walk through a tunnel of light, create music with other attendees on an interactive panel, race others in a game of Mario Kart 64 along with a selection of other video games to play. At Downtown EDC, you could impress strangers by singing your favorite karaoke songs, go clubbing, or even get married. If you needed a break, the Oasis offered a place to lay down and rest or get judgement-free help for anything unexpected. Next to the Wasteland stage, Nomads Land made you feel like you were walking through an actual wasteland with its Mad Max-inspired exhibits. All these art exhibits and more were scattered throughout the carnival grounds. 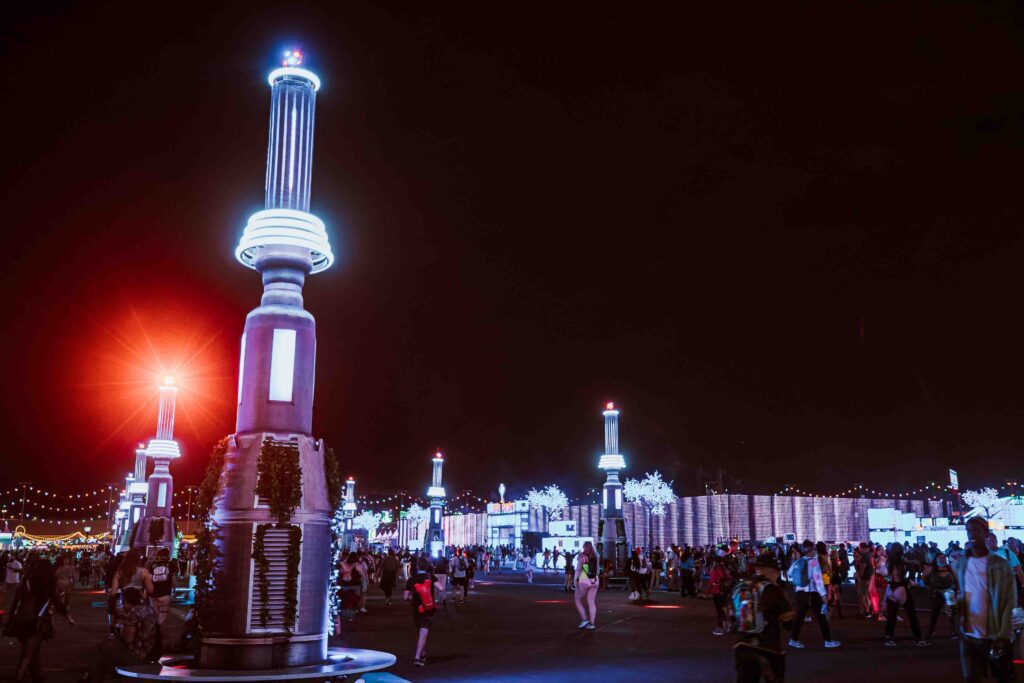 Even if you came alone, it was hard not to make a friend or two before the festival had ended.

In the artist lineup poster for EDC, it is written at the bottom “… and the most important headliner of all, YOU.” At first glance, this could be written-off as a cheesy tagline, but once you have experienced EDC for yourself you will understand how true this statement is. The festivalgoers are just as important—if not more important—to creating the EDC experience as the music artists themselves. Everywhere you will encounter people wearing creative outfits and costumes, and awesome-looking totems where some will make you burst out laughing. The vibes at EDC were fantastic. Just about everyone was chill, nice, and just there to have a good time. I never saw people fighting or stepping over each other to get to the front of a stage. You would find people of all ages, races, and background here, which made EDC very open and welcoming. Even if you came alone, it was hard not to make a friend or two before the festival had ended.

For those that went, Insomniac had once again reunited us under the electric sky for what could be the best EDC yet. Whether this was your first time or your fifth, you came with a squad or rode solo, EDC offered something that all lovers of art and music enjoyed, making the 18 months between the last EDC well worth the wait. As time moves us forward in our daily lives, EDC is timeless. It’s a euphoric blast of energy and love that I hope someday each of you gets to experience.