Gem And Jam Is About To Kick Off!

Gem and Jam 2020 is kicking it into high gear! In true AZ style, the Tuscon desert will come alive on January 31st and will continue through February 2nd at the Pima County Fairgrounds. If you like gem stones, jammin’ music and endless parties then you sure don’t wanna miss this. For their 13th installment, the Gem and Jam crew is bringing us an incredible lineup, live  artists and a whole lot of gemstone vendors. The festival features single day tickets as well as full passes that include camping. To immerse yourself in the magic, I’ve found that camping is the way to go! Not only do you experience the entire range of artists and musicians, you become part of the ever-changing community with surprises around every corner. You find yourself at home in a place of love, acceptance and unrestricted creativity. 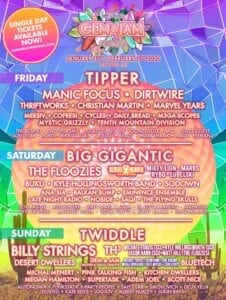 A Lineup Two Years In The Making

After taking a year off, we were all anxiously awaiting for the release of the lineup. All that waiting definitely paid off, and we were not disappointed! Headlining the event are Tipper, Twiddle and Big Gigantic. On Friday, Dirtwire and Manic Focus hit the Emerald stage, with Marvel Years and Thriftworks on the Oxyx stage. Then on Saturday, there will be shows from The Floozies, Balkan Bump, SODOWN, and much more! On the last day of the fest, catch acts from Billy Strings, Desert Dwellers, and Safi’s Lab along with plenty of others. Closing out the festival on sunday night is a Grateful Dead Tribute Band playing a show special for Gem and Jam! With four stages of music, for three days, there is sure to be a perfect vibe around every corner! 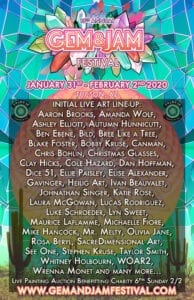 So Much More Than Music!

The crew at Gem And Jam work hard to provide us with an all immersive experience all weekend long. Apart from the lineup, the experience brought by camping is unique and full of surprises. During the festival, Gem and Jam has decided to host a large number of live artists and painters.The full list of artists can be found below, including artists such as Autumn Hunnicutt, Bree Like A Tree, and Mr. Melty along with many more! Holding up to the festivals name, there will also be lots of gem and mineral vendors. Along with them, there will be food and drink vendors as well as merchandise and wares! In just a few days, this new facet of the Gem and Jam Festival is about to immerse us in a world of wonder. You don’t wanna miss this one!

Buy Tickets and Camping Passes at the Gem And Jam website! 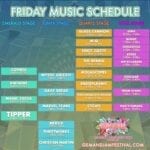 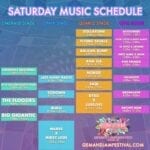 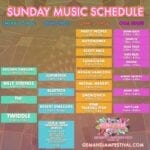 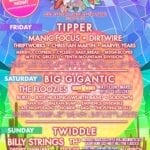 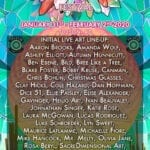