If you’re into bluegrass music, boy, do we have the event for you! Hardly Strictly Bluegrass is very proud to unveil the initial lineup! It has been a long-awaited return to San Francisco’s Golden Gate park. The event will take place September 30th-October 2nd on three stages! This fest comes with an eclectic bill of performers form a variety on genres! Some people you can expect to see on stage include Marcus Mumford, Allison Russell, Las Cafeteras, Lucius, Galactic, AJ Lee & Blue Summit, Joy Oladokun, Charley Crockett, Buddy Miller, and Dashawn Hickman. The lineup was teased with an exclusive medley streaming now on the official Hardly Strictly Bluegrass website and HSB22 app (available for Apple and Android devices HERE). And just today, they have added Emmylou Harris, Jerry Harrison & Adrian Belew – Remain In Light, Tré Burt, Mekit, Jake Blount, The Brothers Comatose, Seratones, The Tallest Man On Earth, Sarah Shook & the Disarmers, and Antibalas to this already stacked lineup.

“The recently released first medley should get fans really excited about what’s in store for them this year – a little bit of everything,” says Hardly Strictly Bluegrass executive producer Sheri Sternberg. “We are thrilled to have old friends return like Galactic and Buddy Miller as well as some first-timers: Marcus Mumford, Joy Oladokun, Lucius, Charley Crockett, and more. Others, like Allison Russell and Las Cafeteras, have joined us virtually the past two years & we’re delighted to have them join us in Golden Gate Park. The entire staff is looking forward to returning home to the best backdrop any festival could ask for.”

“We’ve heard about Hardly Strictly over the years and are thrilled to be part of this gift to the city, a beautifully curated musical weekend made free and accessible to its residents in one of the great parks in the world,” says Holly Laessig from Lucius.

“Playing Hardly Strictly for the first time ever this year feels a bit like coming home” says Tré Burt. “I used to sneak in and play for as long as I could on the footpaths before eventually being kicked out by security back in the day so it feels great to actually be invited onto the stage!”

Hardly Strictly Bluegrass has grown tremendously over the past two decades. They used to party hard for one day and now they’re a three-day festival that attracts more than half a million people! This festival is unique and one of a kid. For starters, it is FREE and boasts a diverse lineup that includes American, funk, rock, soul, and so much more! Of course, there are some fan favorites returning this year but you can also expect to see some newcomers rock your socks off!

Founded by Warren Hellman in 2001, Hardly Strictly Bluegrass marked the late financier/philanthropist’s gift to the City of San Francisco. He wanted to offer a free outdoor music festival to celebrate American music. The four children of Warren and Chris Hellman oversee this festival and have a very special mission: to share a free festival in an environment that fosters joy, creativity, freedom, peace, collaboration, love of music, mutual respect, and spiritual community. 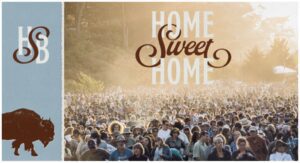 During the pandemic, Hardly Strictly Bluegrass went digital, as did everyone else! They made sure to present us with exclusive livestream events offering a treasure trove of live and pre-recorded performances. And it was a roaring success because over 1 million people tuned in! 2020’s “Let The Music Play On,” a highly acclaimed, three-hour broadcast featuring a rich lineup of major artists filmed in some of the country’s most legendary music venues, proved a landmark moment in a year that saw countless events canceled or postponed around the globe. But that didn’t stop this fest! The following year saw the HSB team embarking on an even more ambitious project, “Come What May,” comprising beautifully captured performances and interviews filmed in New Orleans and San Francisco during the spring of 2021. Things were a little crazy back then- and Hardly Strictly Bluegrass adapted! As a result, they were able to bring in an international audience while showcasing its one of a kind musical message. Over 20 hours of original content featured in “Let The Music Play On” and “Come What May” can be viewed now via Hardly Strictly Bluegrass TV (HSB TV), available for free to viewers around the globe HERE.

Hardly Strictly Bluegrass also played an invaluable role in supporting those whose lives and livelihoods were adversely affected by the worldwide concert shutdown. Things have been tough for those in the music industry. However, since the start of the pandemic, Hardly Strictly Bluegrass’s Music Relief efforts have resulted in more than $4 million being distributed to the music and arts communities in the Bay Area and across the country. In 2021, HSB invested $1 million across three organizations responding to critical relief and recovery needs, including the Esther’s Orbit Room Cultural Revival Project, Sweet Relief’s COVID-19 Fund, and The Tenderloin Museum’s Sounds of the Tenderloin project. For more information, please visit www.hardlystrictlybluegrass.com/music-relief. This is awesome!

In the future, the safety of artists, fans, and staff will remain a top priority for Hardly Strictly Bluegrass. There will be enhanced security at this year’s event with a perimeter facing event and walk-thru screened. You can’t bring your cooler in, which is pretty typical of festivals. All guests are strongly encouraged to be vaccinated and test before coming to the park; masks should be worn when not actively eating or drinking.