I remember my first concert pretty well. After that, I was hooked into this culture and couldn’t wait to experience more of it. A few of my buddies had previously gone to Electric Forest, so of course, we had that on our list for the summer. And Spring Awakening’s lineup was pretty epic as well, so of course, we had to go to that. But I kept hearing about EDC. I have to tell you guys about one of the best festivals of my life, despite so many crazy things happening.

As a newbie in the scene, I heard a lot of conflicting statements regarding EDC. Some people said it was the best experience of their life. Others, like some of my buddies, said it was basic and 4-on-the floor music and that I wouldn’t have a good time. The lineup looked pretty cool so I convinced one of my buddies to go with me. He didn’t really have an opinion besides that he wanted to have a good time, so he agreed to go with me. (This guy, Ben, is now my boyfriend of almost 8 years. Pretty crazy that we experienced our first concert and festival together! We got together shortly after this festival.) He convinced one of our other buddies to go, so it was the three of us. Ticket purchased, I’m ready to have a great time!

Honestly, looking back to the lineup, I only knew the big ones. There were so many artists I discovered that weekend! 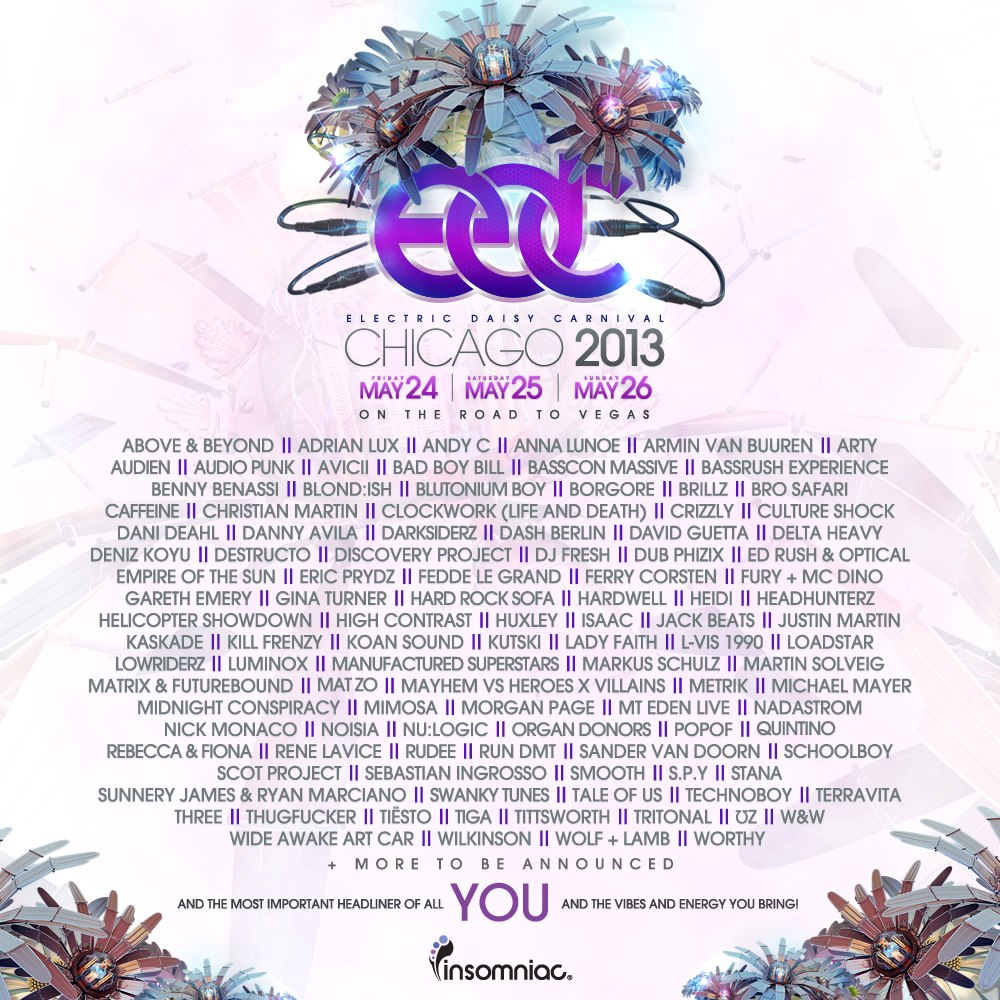 Getting Ready for the Trip

To be honest, we didn’t have a clue of how to get ready for a festival. I don’t know how we didn’t starve that entire weekend because we were so unprepared. We packed a tent and the basics, like lunchmeat, peanut butter, chips, etc. We didn’t bring a camp stove and somehow expected to survive on lunchmeat and peanut butter all damn weekend. Stupid us, we didn’t know about canopies or anything remotely useful at a festival. We also neglected to look at the weather. I figured it might get chilly at night, so I made sure to have jeans and a hoodie. I planned ahead and brought a few extra things, but honestly, this festival taught me so much.

Heading Into The First Festival- Preparty

As we pulled up, they were directing traffic and as we parked our car, our neighbor said, “Hey, I’m camping with my friends, so you can have our spot.” SCORE. I mean, we didn’t really need it because we didn’t have anything anyway. Honestly, we were so unprepared for this festival… it isn’t even funny. We met up with some friends we had met at a previous show and raged all night at the tiny preparty to BARE. It was a blast.

The next day, it was raining. Bummer. We decided to make the best of it and layer up. It shouldn’t be too bad, right? It was cold! We went in the first day, ready to have a good time. After all, it couldn’t rain all weekend, could it? It truly didn’t and there was some sunshine during the daytime! Ben and I were ready to go! Don’t mind the 2013 raver feel going on here! 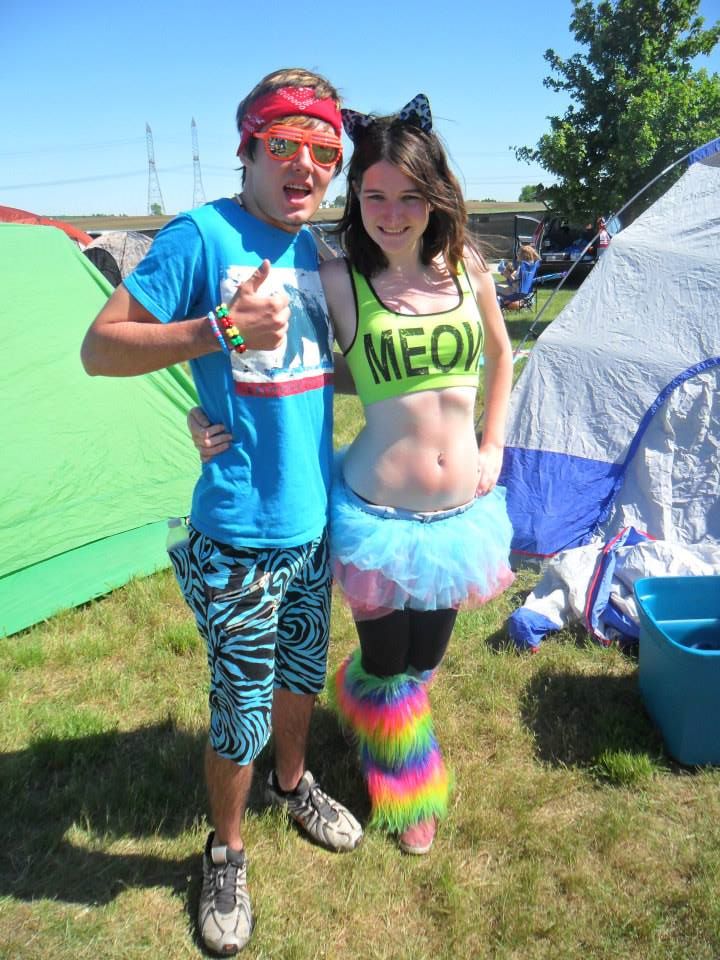 I remember we were chilling at Avicii when my two buddies said, “Hey we’re going to head back to the tent. We’ll meet you back here.” Yeah, we were stupid like that. We actually thought that would work. YEAH RIGHT. So the set ends and a bunch of people leave. I’m just standing there, by myself like uh what do I do now??” This guy that was right in front of me offers to let me join his rave crew. Yep, best decision. This group of guys was super cool. Reid and I ended up hanging out basically the rest of the festival and even stayed in contact. We still talk to this day! Festivals are so cool like that. 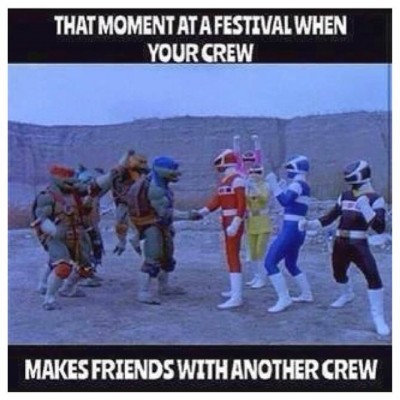 It continued raining the whole night, but we didn’t let that stop the fun! I never could find Ben or Gideon, the two that I came with. I kept texting them, but you know how that goes at a festival. Plus, we had terrible service. I kept hanging with Reid the rest of the night and we had a blast. Would have been nice to find the people I came with but it was great to have made friends. I eventually ran into them at the tent. 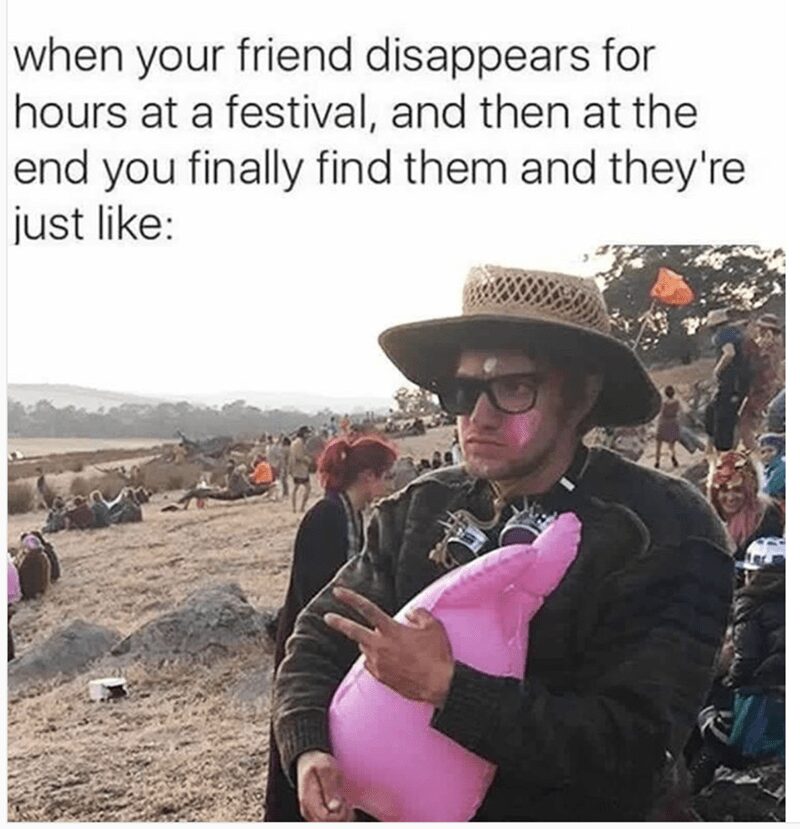 It was so cold in my tent that night. We did NOT pack enough blankets, that is for sure. OOPS. Plus we were all wet and such.

More rain. Honestly, this whole weekend feels like a blur. I remember the first day because I met Reid, but otherwise, the next two nights were spent with everyone in my crew. I had some other friends at the festival as well and enjoyed seeing sets with them and hanging out at their campsite. This is a terrible photo because it was taken pre-smartphone (ugh remember those days??)… but you get the point. Reid is pretty cool. And we’re soaked.

My neighbors were pretty cool too. They definitely helped us survive since all we had was lunch meat. We also ran into town and got some Pizza Hut. Seriously, the best. Our neighbors had a canopy and so much of our time was spent under their canopy hanging out.

I was so new that I don’t remember a lot of the sets I saw. One of my top sets of the weekend was Tiesto. But even better than that? I discovered the wonderful Dash Berlin. Being new in the scene, he was a name I hadn’t heard of. This was by far my favorite set of the weekend and it closed out the entire weekend. Dash played Sunday night. Actually, I still have the glowsticks he was passing out. You know, those foam light up stick things? Bro Safari was also an epic set, too. We raged so hard! Even though I didn’t know so many people on the lineup, I had a blast anyway.

One of my favorite festival moments every took place at EDC Chicago. I’m not sure where everyone in the group was, but Ben and I were getting water. We filled up and right as we were ready to walk off, the fireworks went off. We stopped to enjoy them and saw this other rave crew with their arms around each other. They invited us to join and we stood there, wet, cold, but enjoying life. That moment is so magical. 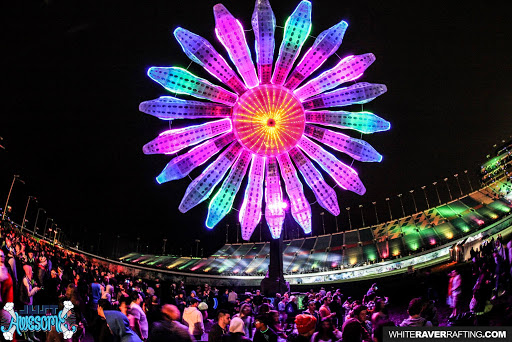 The big takeaway here is that even though it rained for nearly 3 days straight, I was soaked, it was COLD, and I didn’t know what the hell I was doing, EDC Chicago was truly a magical experience for me. I remember that festival so fondly. I can’t imagine it going any other way. This inspired me to make the journey to EDC Vegas. My first festival was one I won’t forget, even though EDC Chicago isn’t going to happen again. I am happy that I was able to attend the one and only EDC Chicago. It did have some sunny times!