If you’ve ever had the pleasure of going to Outside Lands, in San Francisco, then you know how absolutely amazing it can be. For those of you that have not been, Outside Lands is a festival that takes place the second week of August, with a theme of sustainability and how to preserve and protect parks. It takes place in Golden Gate Park and it has everything you could ask for; music, food, comedy, Discussions about Virtually Everything, and new a curated cannabis experience.  This was the tenth year of this festival, and I had the chance to interview some attendees about their experience. 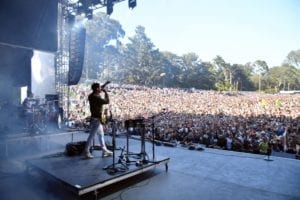 People loved the headliners, The Weeknd, Florence and The Machine, and Janet Jackson. But, attendees liked that there were other things to do besides music. Such as the Grasslands area; a “curated cannabis experience” where you can learn about all things marijuana. Plus, you are able to see comedy shows as well. In addition to music, comedy, and weed, there were also lectures being given on sustainability, and this year Bill Nye was speaking! For those of us who grew up watching the Bill Nye videos in middle or high school, that was an amazing blast from the past. 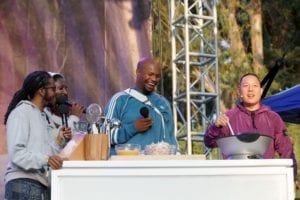 Festival-goers could also explore the Gastromagic area. They liked that it wasn’t your normal hot dog and pretzels, and that there were actual chefs whipping up tasty treats. There were also wonderful art installations that added to the earthy, sustainable, vibe of the festival. Booths that had voting stations and planned parenthood information were a huge success, given the very liberal audience that this festival is geared towards. Guests also raved about the drink prices. Given that they were at a festival, which already warrants high prices, and in one of most expensive cities to live in in the country, people were stoked to pay around 10 dollars for a drink. 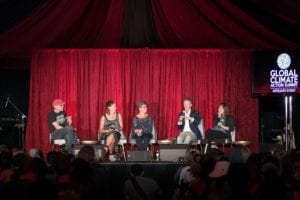 But, with the good, come some setbacks. Golden Gate Park is huge, and people didn’t like having to walk almost 25 minutes between stages. Alex, 26 said that “if they continue to do that, then they should stagger when artists play or have artists perform twice in one day.” A lot of festival goers missed some of their favorite artists because they were seeing another one of their favorites and couldn’t get to the other stage in time. Given that Outside Lands starts on Friday at noon, a lot of people have to take work off, if they want to get as much out of their 400 dollar pass as they can. 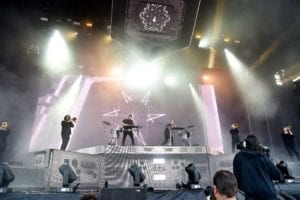 It was suggested Outside Lands be moved to Labor Day Weekend, that way most people already have a long weekend. The biggest complaint I had heard, though, was that there were not enough bathrooms. This forced people to use the bushes and vegetation around the park as a toilet. Which, given that part of your very expensive ticket sales goes to maintaining the park, seems counterintuitive. There were vomit and other bodily fluids all over the park, which would seem to defeat the purpose of them making a point, throughout the festival, of being sustainable and protecting the park.

Overall, though, most attendees would return! The blend of food, music, comedy, lectures, and fun activities provides for a well-rounded festival. If you love music, but aren’t the type of human to dance for 12 hours straight, then Outside Lands would be the festival to check out. A lot of places to sit and eat, art to look at, and things to learn. Outside Lands is already preparing for 2019, so be sure to be on the lookout for the lineup. It’s bound to be just as magical and informative as years past!

Photos Courtesy of Outside Lands by FilmMagic.com

Posted in Festivals and tagged Another Planet Entertainment, Arts, california, Cannabis, Curated Event, festival, Florence and The Machine, Gastromagic, Golden Gate Park, Grasslands, Janet Jackson, music, Music Festival, Outside Lands, San Francisco, Starr Hill Presents, Superfly, The Weekend
← Hard Summer During A Hot SummerFestival-ing Around The World →
Don’t forget to follow The Festival Voice for all of your electronic music and festival news!
Instagram: @TheFestivalVoice
Facebook: @TheFestivalVoice
Twitter: @thefestvoice
Snapchat: @thefestvoice
YouTube: TheFestivalVoice
We use cookies to ensure that we give you the best experience on our website. If you continue to use this site we will assume that you are happy with us eating these cookies.OkLearn more