As we slowly rise from the ashes of the pandemic, festivals have been dropping some insane lineups. I mean, we all saw When We Were Young break the internet with its lineup drop. You also have the ridiculously stacked Bonnaroo lineup that we are doing the official Artist of the Day series for (I say official because no one else is doing it as far as I know). And this past week we saw SO WHAT?! Music Festival dropped its first lineup since 2017 with a huge blend of metal, rock, hip-hop, alternative, and pop-punk. Out of all the lineups dropped so far this year, SO WHAT?! takes the cake for booking the most bands including headliners I Prevail, Trippie Redd, Simple Plan, Rae Sremmurd, blackbear, and 2 Chainz. I even know two of the undercards, glimmers and the Callous Daoboys, both of which are local Atlanta bands I have covered for Immersive Atlanta. 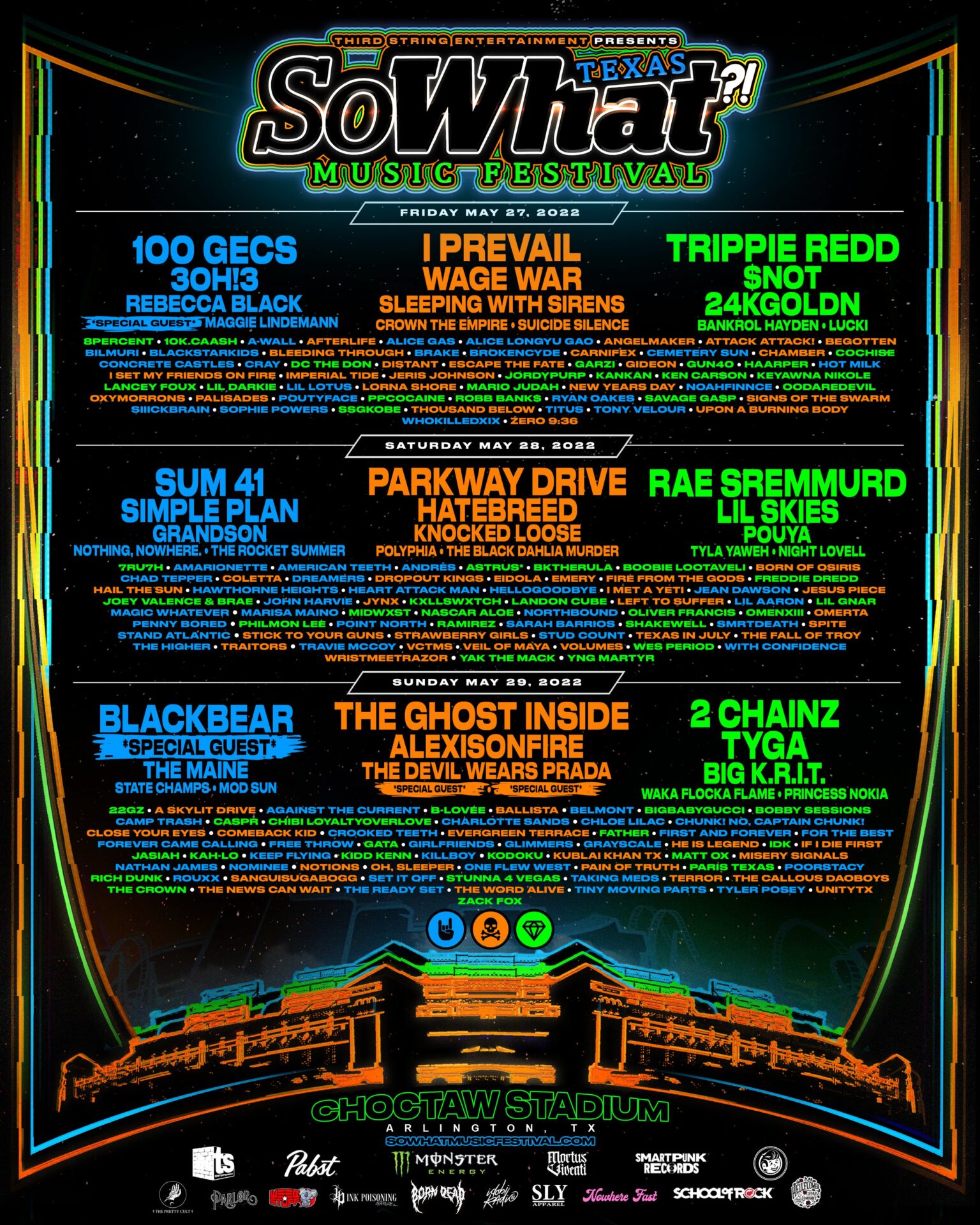 SO WHAT?! started out in 2008 as SOUTH BY SO WHAT?! MUSIC FESTIVAL. It was originally designed as a low-price Dallas music festival that featured over 50 artists that were also booked at SXSW. The festival ran from 2008 to 2017 across various venues in the Dallas area. This year the festival is taking place at Choctaw Stadium in Arlington, Texas. SO WHAT?! has previously included a slew of artists including Asking Alexandria, The Early November, Motion City Soundtrack, Mod Sun, Outtasight, G-Eazy, Scary Kids Scaring Kids, Pierce The Veil, Hellogoodbye, Cartel, Emmure, We Came As Romans, For Today, Sleeping With Sirens, Enter Shikari, Halifax, Breathe Carolina, A Day To Remember, The Devil Wears Prada, The Maine, Suicide Silence, Attack Attack, Alesana, The Cab, Taking Back Sunday, The Used, Bring Me The Horizon, Atreyu, Underoath, and New Found Glory.

SO WHAT?! is offering your standard three-day passes one-day passes for general admission, however, VIP and Platinum VIP are only upgrades to GA tickets. You must purchase a GA ticket in addition to the VIP upgrades. Three-day GA is only $269. The VIP upgrade is billed at $299 with the upgraded Platinum VIP at $695. Both VIP upgrades come with a bunch of crazy perks from meeting the artists to getting a limited edition NFT. For how deep the lineup is for SO WHAT?!’s comeback, going VIP might be the move, especially if this is your first festival since before the pandemic. Also, note that this is not a camping festival, so you will need to find a hotel or Airbnb to stay at. The covid requirements have not been announced yet, but with Coachella and Stagecoach dropping their vaccine requirement this year we could see other festivals follow suit. This is becoming the year that we return to normal, so consider making the trip SO WHAT?! to celebrate.