Astroworld was a rap concert that took place this weekend in Houston, Texas. The festival was supposed to take place both Friday and Saturday but the concert was cut short due to the events that happened. First off, people stormed the gates to enter the festival. That started everything off on the wrong foot as now there were too many people in the festival and it was over capacity. Personally, I’ve never understood why you would storm the gates. Sure, festivals are expensive, but they are that way for a reason. So many people are paid with your ticket money- not just the artists and the festival organizers. So why storm the gates? Is a concert really worth risking going to jail or hurting someone?

I’ve been to plenty of concerts and yes, they get crazy. People want to get up close and personal with their favorite artists so they try to head to the front of the stage. However, people generally have consideration for others and don’t crowd people too much. I know that I like my space and so I try to give other people that same courtesy.

An hour before Travis Scott was supposed to play, it started getting tighter and tighter close to the stage. And when he started? Mass chaos erupted. People pushed to get closer to the stage and it got so tight, people began passing out. At this point, if you were up close, you couldn’t escape. There was no way to get out of this. People just kept pushing and shoving.

And then- as people were passing out, people tried to get help. One lady was crowd surfed to safety- even though she was already passed out for the experience. An ambulance tried to get through the crowd and people jumped in its way and attacked it. People were downright reckless. They didn’t care, let’s just keep getting lit, what a fun joke, right? And Travis Scott??? Kept freaking trying to perform. Kylie Jenner was there too and she thought it would be cool to film the ambulance for her Insta story.

I am just… appalled. I am in shock. Every single death was completely avoidable. People made terrible choices with no regard for the lives of others and… I honestly don’t even know what else to say. You can check out first-hand accounts of what happened HERE, but I warn you, it’s gut-wrenching. You can also find the names of the deceased here. 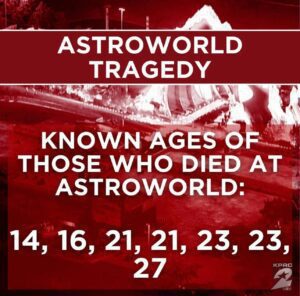 Festivals are supposed to be an escape from reality- not an end to your reality.