Seriously, we can’t get enough of Paul Oakenfold! He is an internationally acclaimed DJ and producer. Paul Oakenfold is known for recruiting superstar collaborators for his studio albums. For instance, this includes superstars like Pharrell, Grandmaster Flash, Perry Farrell, and Ice Cube, to name a few. Oakenfold’s forthcoming album, ‘Shine On,’ follows this same trajectory, packed to the brim with star power.
This past summer, the album’s first single was revealed as ‘The World Can Wait’ featuring the voice of Luis Fonsi. It is a gorgeous track that if you haven’t checked it out by now, you’re missing out! Luis is an artist most recognized for his work in ‘Despacito’ with Justin Bieber, which has collectively gained over 20 billion streams. Now, Paul Oakenfold embraces his longtime love affair with Hip-Hop on the second single ‘What’s Your Love Like” featuring Grammy Award-winning rapper/actress Eve and emerging rapper/producer Baby E.
The track is a massive collision of worlds and genres. Eve’s instantly recognizable vocals kick off the track, with Baby E’s adlibs echoing in the background. It’s an immaculate combination of catchy pop toplines, with a dance bassline and Oakenfold’s signature groove. You’ll be dancing along in no time at all! 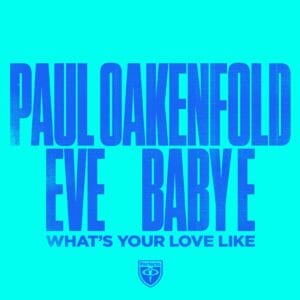 Oakenfold is no stranger to the Hip-Hop scene and has played a significant role in the careers of some of the genre’s most important artists. Paul managed Britain’s number 1 Hip-Hop DJs Mastermind (four DJs on 8 decks) and London All Star Breakers. This group actually finished third in the world at the Breakdancing Championship in New York City. Only the famed Rock Steady Crew and the New York City Breakers finished higher.
On the label side, Paul was previously head of A&R for Profile Records in Europe which was home to Run DMC and Rob Base. In addition, he was head of A&R for Champion Records where he signed DJ Jazzy Jeff and the Fresh Prince, which had a top ten hit single with ‘Girls Ain’t Nothing But Trouble.’ Paul was instrumental in signing the rap band Salt N Pepa and was hired by CBS Records / Sony to take care of Public Enemy, LL Cool J, and Beastie Boys on all ventures in the United Kingdom. Paul was also one of the original DJs on the Pirate Station on Kiss FM, which now has gone on to become the biggest urban station in the UK, where he was playing hip hop before anyone had access to it.

Over the years, Paul Oakenfold has proven himself to be an influential force in dance music. As a result, he has consequently shaped the dance music scene itself. The man was voted ‘World’s Best DJ’ and ‘Best Trance DJ’ on multiple occasions, as well as being named ‘Most Influential DJ of All Time’ by the Evening Standard. This is all in addition to the veteran DJ-producer having an established career portfolio. Additionally, his imprint Perfecto Records has been one of the longest-running dance record labels, responsible for many dance hits from budding talent. Not only has he made his mark in the dance music scene, but he has also entered mainstream works. He has produced soundtracks and cues for Hollywood blockbuster movies. For instance, this includes Swordfish, Collateral, The Bourne Identity, Matrix Reloaded, and Shrek 2. His eclectic portfolio has given him opportunities to open for megastars like Madonna and U2, as well as to perform at unique locations such as Base Camp Mount Everest, Stonehenge, The Great Wall of China, and Area 51. Who wants to go to a show at one of those epic locations?? Count me in!
Eve made her breakthrough in 1999 on the Grammy-nominated The Roots song ‘You Got Me,’ and went on to release four solo albums. In 2002, she received a Grammy Award for ‘Best Rap/Sung Collaboration for the song “Let Me Blow Ya Mind” with Gwen Stefani. As an actress, Eve is known for her roles in the ‘Barbershop’ film series while also achieving success in fashion with her clothing line, Fetish.
Out now on Perfecto Records
Support on all platforms for What’s Your Love Like HERE
PAUL OAKENFOLD ONLINE
Website
Instagram
Facebook
Youtube
Spotify
Apple Music
Soundcloud
Twitter
Perfecto Records
Posted in Festivals and tagged Baby E, Bestie Boys, Eve, Fresh Prince, Grandmaster Flash, Gwen Stefani, Ice Cube, Jazzy Jeff, Justin Bieber, LL Cool J, Luis Fonsi, Madonna, new music, New Release, news, Paul Oakenfold, Perfecto Records, Pharrell, Press Release, Public Enemy, Salt N Pepa, Shine On, The Roots, U2
← Steve James Is Up To Some Trouble With Not FamousLeaving Laurel Releases A Secret Place EP →
Don’t forget to follow The Festival Voice for all of your electronic music and festival news!
Instagram: @TheFestivalVoice
Facebook: @TheFestivalVoice
Twitter: @thefestvoice
Snapchat: @thefestvoice
YouTube: TheFestivalVoice