I mean, I love a ton of other festivals but I’m the dubstep queen. I adore dubstep and so Lost Lands is my perfect festival. I’ve got to go check out Bass Canyon one of these days, but it’s 24 hours away while Lost Lands is only 8. It’s perfect because I can jet out after work on Thursday! I was so thrilled to be back at Lost Lands 2021 and womping with those dinosaurs!! I’ve been every year since the inaugural year cause I’m a headbanger for life. Note: We weren’t officially covering this festival so I didn’t take crazy photos this time. 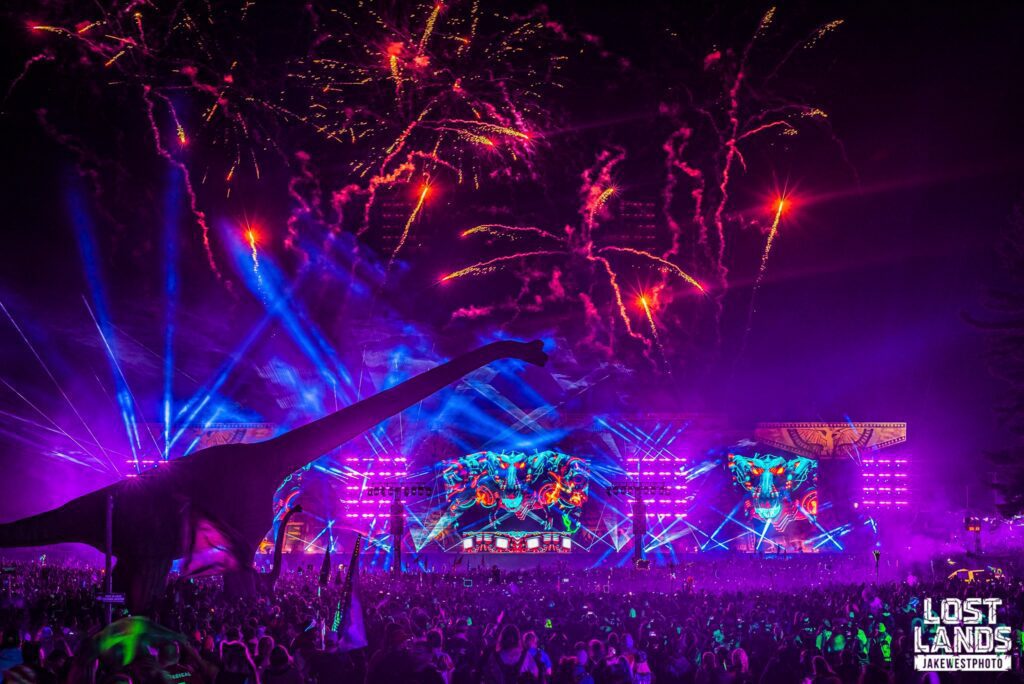 First off, I want to preface this post with the fact that I didn’t camp. It wasn’t because of the conditions- it was because I struggled to get the days off from my regular job (not TFV, of course). I can typically get summer stuff off easy but struggle from September-May. It is what it is. I had planned to stay in an Air B & B in Columbus anyway, so the camping stuff didn’t deter me. I do believe that Lost Lands truly worked their dino tails off to get us the experience we deserve. I know a lot of people were angry about the situation, but overall, it all worked out!!!

So I got off work at 4 pm on Thursday, picked up the rental, and headed out with my crew to Columbus. The drive itself isn’t too bad (except Indiana. Why are they ALWAYS doing construction????) and at night, we breezed through. We sadly hit an opossum on the way and I was really sad. Why did he have to run out in front of me like that?? But we got there at like 3 AM (YAY), grabbed the obligatory White Castle, because we don’t have any near my house (the nearest one is three hours away!), and checked into our dope Air B & B. 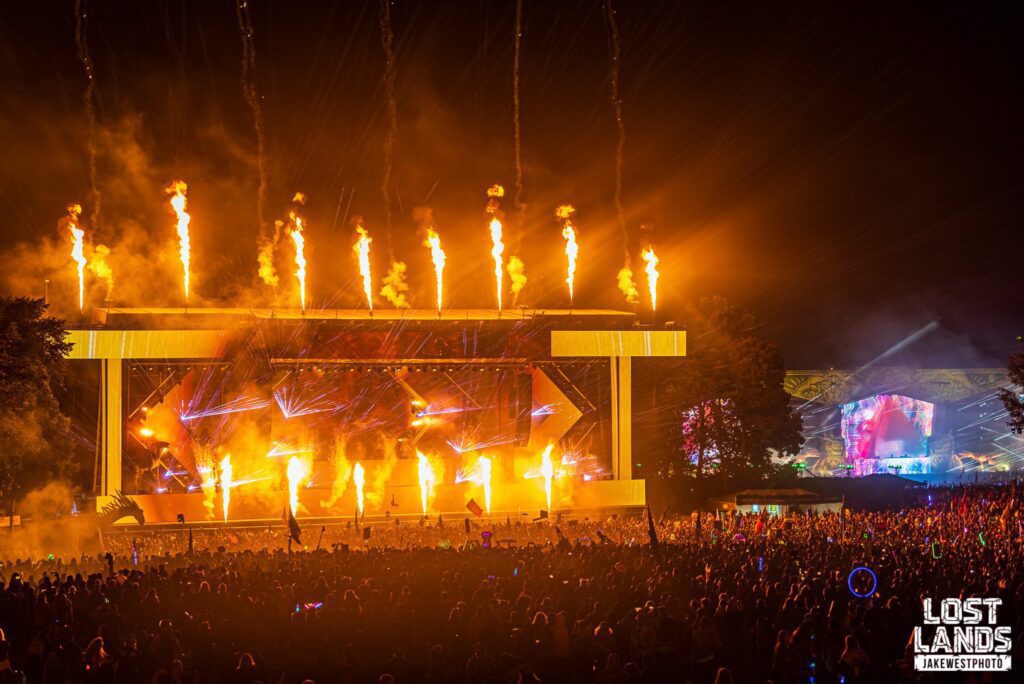 Of course, we were tired af on Friday, but I forced myself to get up and started raging.

I’m typically the driver, so my crew started pregaming but I chillaxed until we got there. We finally got there, parked, and looked at that line. It was over an hour to take the shuttles so we decided to walk it. It was a 45-minute walk and we all wanted to drink anyway so might as well walk and have a few right?

Then, as a JOKE, I threw my thumb up when this truck passed. Now, don’t get me wrong, there were tons of trucks taking people for $5 a person but I was joking when I threw my thumb up. BUT HE STOPPED! He was totally a chill dude, picked us up in his tailgate, and drove us to the point where security made him drop us off and we had to walk the last ten minutes. We tried to pay him but he said he lived right there, so it was all good.

As we walked, we met these really cool girls who were actually there for their Honeymoon. I wish I would have taken their picture, but HOW AWESOME IS THAT?

Night one was beyond legendary.

Everything was dry, the lines weren’t too bad for anything. We had so much fun headbanging! Some of my favorite sets were Dirt Monkey, Getter, BTSM, Zomboy, and Excision. Seriously, I loved roaming around and seeing all the friends I had made in previous years at these festivals.

Night one- we decided to take it easy and took off after the Excision set. It was only midnight, but we really didn’t want to push ourselves too hard on night one and then be burnt out for the next two nights. We drove back to our beds, air conditioning (actually, we used heat lol), and the shower. Plus- a fridge. Winning.

I was so thrilled for Day 2 because we were back. The downside of Day 2? It was the coldest of the three nights. I wore my dinosaur onesie to keep warm. We needed it, that’s for sure! The vibes were unparalleled on Saturday night. We had an absolute BLAST seeing amazing sets such as  Barely Alive, Sullivan King b2b Kai Wachi, Virtual Riot, Svdden Death, Ganja White Knight, and Slander.

We were definitely feeling the vibes on Saturday so we decided to stay a little later and check out Dodge & Fuski. To be honest, out of the 8 years I’ve been going to festivals, I have never seen them. Wild! We also checked out the Disciple Takeover and danced until I could barely stand up anymore. Check out this video of what happened late at night! 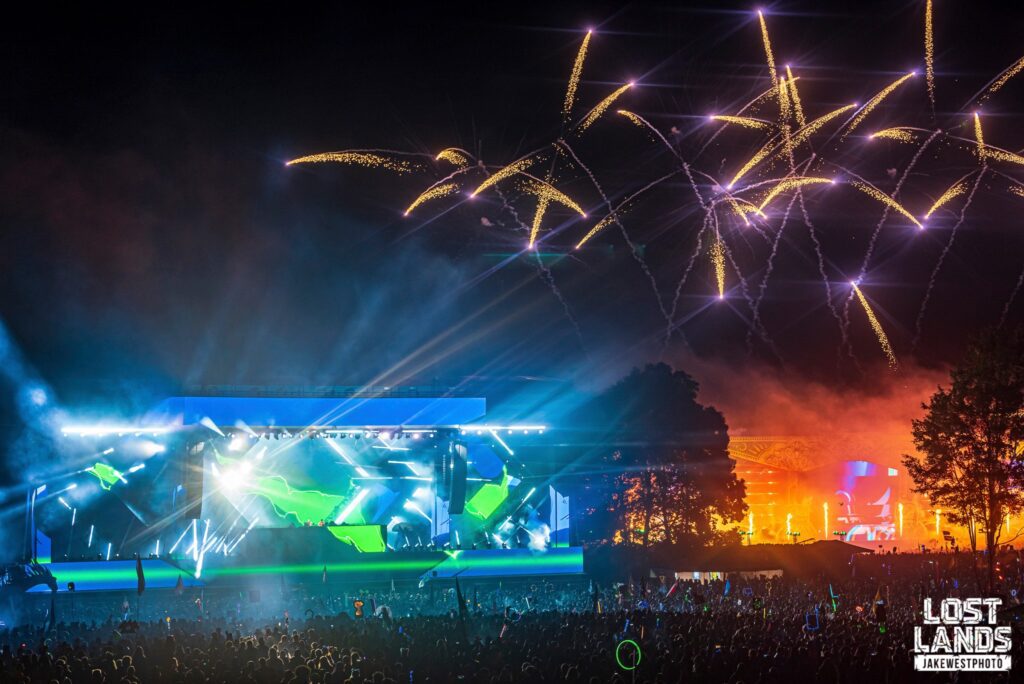 Day 3 was warmer than the previous nights and we were determined to make the most of our final day.

I am a HUGE Adventure Club fan so I decided I was going to check out the front row for a bit. BEST. DECISION. EVER. My buddy Stewart and I raged super hard front row for both Adventure Club and 12th Planet. It was really cool because I actually got texts from my friends back in Iowa about being caught on the Livestream. My other friends had disappeared but then we had to head out to the Excision Throwback set, of course. My very first show was an Excision show so I was excited to hear all the tracks I’d loved for years. We jammed and actually found some of our other friends until 11 when all the music had to be quiet.

But we were NOT ready to leave, not yet. We wandered back to the Wompy Woods before making our way to the Forest Stage. They were doing a Monstercat takeover and oh boy, let me tell you, I was NOT ready for that. We danced for Slippy but then Ace Aura absolutely KILLED it!! We stayed for part of Pixel Terror before finally heading home for the night.

I’m ready for Lost Lands 2022. I plan to buy my tickets right away because honestly, this festival is home for me. Of course, I love others, but Lost Lands holds a special place in my heart. The detail in the dinosaurs is absolutely unparalleled, too. Did you know they all have buttholes? HA! See you next year, Headbangers!!

PS- I lost my card at Lost Lands and didn’t even know it. My friend lost his and went to Lost and Found- no problems, it was there. But mine? I didn’t even know I lost it until Lost Lands themselves reached out to me to tell me! They are going to ship me my card. What great service!