We’ve been lucky enough to enjoy Dirtbird Campout for eight lovely years. It all started with a dream of an independent music festival that would cut through the mediocrity of corporate raving and foster a community of weirdos and dance heads looking for something more. The result was Dirtybird Campout, a wild and free playground for fans of all backgrounds. This is truly a place where creativity and positivity reign supreme. And everyone is welcome to enjoy it while choosing your own destiny. As a result, we see Campout, a festival that prevails as one of the BEST boutique festivals in the world. This is truly where both the uninitiated and veterans merge on the dancefloor and games field alike to get down like it’s the last party on earth. Get ready for Campout! 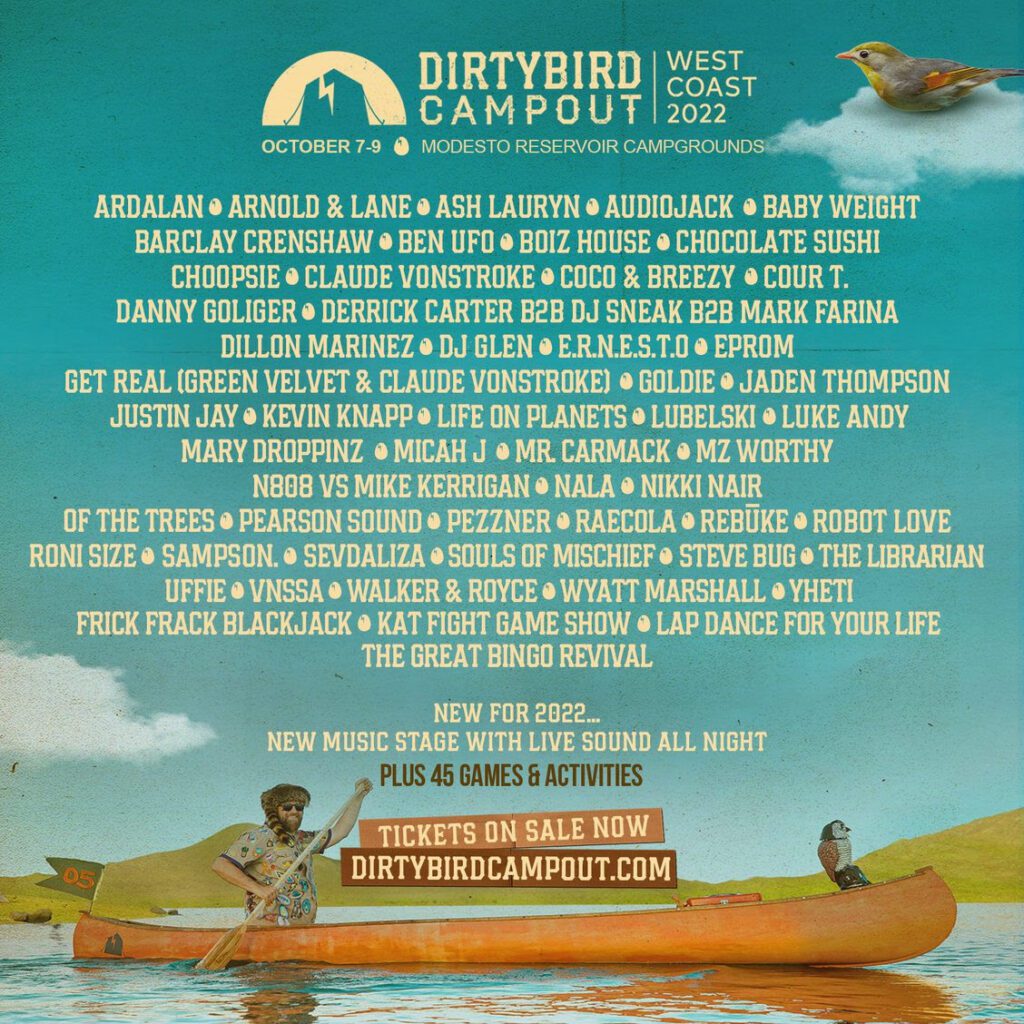 The lineup was already one that stood out among all others. These additions join some of the biggest and best names on the planet. Previously announced artists include Green Velvet and Claude VonStroke teaming up for their Get Real super-group, Irish house, techno and rave sensation Rebūke, standout producer and audio engineer Lubelski, and label favorites such as groove-heavy house duo Walker & Royce, beat-driven party starter Ardalan, and vocal maven Nala. Fashionable twin-sister production duo Coco & Breezy, fan favorite VNSSA, pioneering house producer Kevin Knapp, and original Dirtybird artist and Anabatic Records founder Mz Worthy. 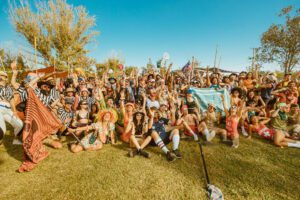 Ready To Join In On The Fun?

Kick off your weekend with the Thursday Early-Arrival Party! Grab your best pajamas and get your groove on with a special set from house legends Derrick Carter, DJ Sneak, and Mark Farina all going back to back for a party that’s certain to kick off the weekend right. Claude VonStroke welcomes fans back to camp with the warmup set as well. This is going to be a grand time!

This year’s edition of campout will also see the introduction of a new third stage, a Dirtybird Late Night Stage called the Hideout. Get ready to party until the AM at this brand new stage! While we’re sad to see the old silent disco leave, we’re thrilled because you can groove all night long, until the sunrise set. Curated by the legendary campout creative director, Blakeshine – this area is the unofficial camp counselors after party. Don’t be surprised if you have to participate in something ridiculous or answer some funny questions to get in the door!

At Dirtybird Campout, the fun begins upon arrival! You’ll be sorted right away into  Orange, Green, Purple, and Red teams to compete all weekend in over 45 events for the now famed Ironbird trophy. Which team will win in this ultimate face-off? Both artists and attendees face-off on the dodgeball court, try not to run in the speed walking challenge, swim for the finish in the .5km Floaty Race, test their strength in Tug O War and so much more, all in a quest for one color team to take home the glory.

Claude’s Cabin remains an outpost for the oddities that make Campout one of the most unique events in the world. There are so many unique things to do at this show including whimsical game shows and activities like Kat Fight Game Show, Lap Dance For Your Life, and The Great Bingo Revival have also been announced with today’s phase two additions. This is in addition to activities like the Lovebirds Dating Show, How To Grow Shrooms, Spelling Bee, Twerkaholicz Twerkshop, Bad Drag Show and Deep House Yoga. And the fun doesn’t stop there because new this year will be the Lord Cunni Contest, a pie eating contest that will spiral into an ‘eating out contest’ demonstrated on fruit and hosted by special drag king guests, onwards to Campers Court, where Campers will be assigned lawyers and can spell out their grievances from the Games Field in a theatrical court TV setting. Frick Frack Blackjack will continue to dominate the late night with outrageous anything-goes renegade ‘gambling’ in its own unique area. 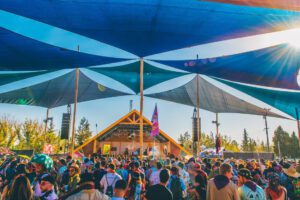 The venue of the Modesto Reservoir Campgrounds offers clear waters perfect for swimming!

You can enjoy the view or hook up your RV alongside the lake for picturesque views, lush trees, and most importantly – unlimited opportunity for adventure. Regularly cleaned showers and bathrooms are available everywhere for use in addition to plenty of fresh water locations in all festival areas to provide the best camping experience possible for attendees.

Campers looking for an upgraded behind the scenes experience can also look towards the VIB Pass, which provides access to the backstage lounge area with exclusive amenities, private restrooms, and one BBQ voucher valid for any of the Friday, Saturday, or Sunday feasts.

Get tickets to Dirtybird Campout on their website and join the tight-knit Dirtybird family on the lakefront dancefloors of the Modesto Reservoir Campgrounds this October 7-9.