Chicago Fam! We’re super excited to announce the newest Chicago festival, Necropolis! Auris Presents is bringing you their newest festival, and after the success of their last event, Heatwave, they wanted to bring the heat yet again for Necropolis Music Festival. They are also the team responsible for ARC Music Festival, happening this Labor Day. Northerly Island in Chicago will be home to all things spooky and scary, as this festival happens over Halloween weekend, October 29 & 30th. Get ready for the BASS because bass-heavy names take the forefront at this festival.

Imagine a world where bass collides with the dark fantasies of Halloween. This will be a creative wonderland where thousands of fans will showcase their BEST costumes. At the festival, you’ll get to view the iconic Chicago skyline in addition to Lake Michigan, with two stages. This is going to be a great setting for the inaugural event of the Halloween season.

The debut Necropolis Music Festival will feature LEGENDARY bass acts in addition to rising artists, all getting you ready to HEADBANG. 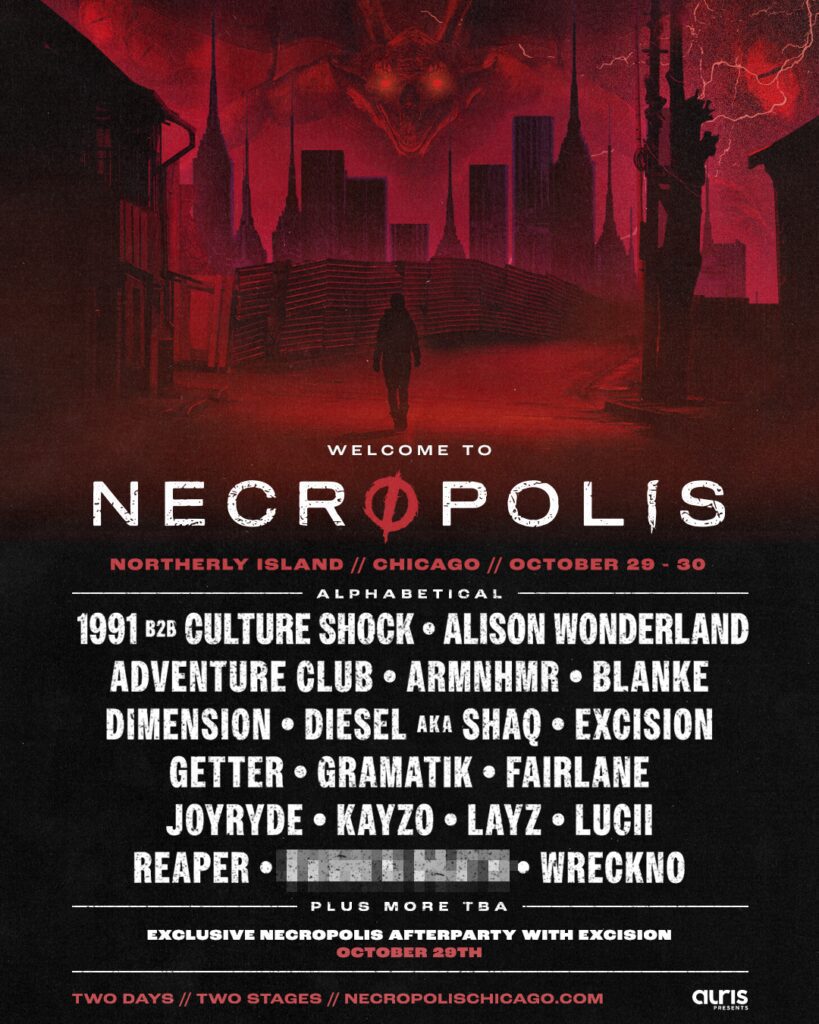 Ready for this lineup?

You’ll be breaking your neck before we even begin because we start with Alison Wonderland and Excision. Both artists have been doing well lately. Alison just recently released her Loner album while Excision does what he does best, which is breaking everyone’s neck in the crowd! The man himself has amassed over two billion lifetime streams.

These acclaimed headliners will join some of the best in the bass genre such as DJ Diesel (aka Shaq), Grammy-nominated melodic bass du Adventure Club, and innovative and forward-thinking electronic producer Getter, and renowned electronic meets rock crossover producer Kayzo. Seriously, when I saw this lineup I told myself maybe Lost Lands wasn’t my last festival of the year… maybe I could squeeze in one more. Okay, not maybe, I think I’m going.

Necropolis will be led by the team behind Auris Presents, who are in charge of the best live electronic music in the city. They are behind the magic at RADIUS, Concord Music Hall, PRYSM, and so much more. If you hang out in Chicago like me, you’ll know that Auris Presents is what it’s all about!

Attendees can sign-up to be the first to get their festival passes at the Necropolis Festival website. General tickets will be on sale 8/19 at 12pm CST. Stay tuned for the Phase Two lineup coming soon.